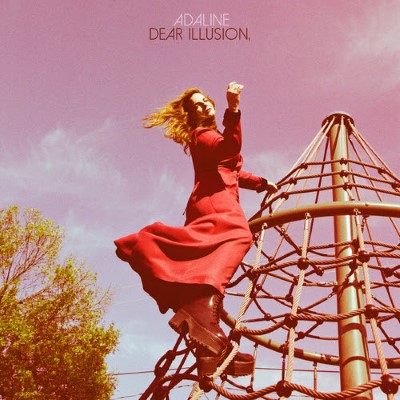 Toronto-born queer artist, Adaline, has unveiled her new album, Dear Illusion,. Rooted in alt-pop, the seven-song endeavour provides an upbeat perspective of Adaline’s experience as a member of the LGBTQ+ community. In turn, she has created a dreamy, spacey atmosphere with universally relatable lyrics in which listeners wish to reside.

The album lifts off with “Waist Down” where Adaline repeats the phrase, “we’re only happy from the waist down,” in a passionate, dynamic chorus. The album-opener is undoubtedly upbeat, but there’s this sense of underlying moodiness that brings it down to Earth. There’s something about this track that speaks directly to the album artwork, capturing a sense of breezy youthfulness with a pink-radiating blossomy touch in every word Adaline cries.

“Part Of You” shows off Adaline’s way with words that has earned her the reputation as one of Canada’s premium songwriters. The phrase, “every moment like a portrait, body frame encaged within your tight grip” is an immensely powerful line that Adaline just throws into the mix without hesitation. That line itself brings up the most vivid still-frames of your memory. A hushed vocal performance makes this song sound small and sweet, but doesn’t belittle the track one bit. The accompanying music video shows Adaline gracefully moving her body to the song in a strategic manner, and the production on this track was executed with the same choreography.

Adaline released three singles from Dear Illusion, but the following songs, “Body Talk” and “Over You” were not among them. Upon listening, they’re just as hook-infused as the album’s hits, making the listener wonder if the seven-song EP will bottom out at all. These songs are nothing short of lush. “Body Talk” specializes in harmonies that are used to emphasize Adaline’s clever lyricism. Phrases like “until you say it out loud, it doesn’t really count” are belted out in a memorable ear-candied chorus. As a musician myself, I’m actually frustrated that I didn’t write that line myself.

“Over You” is the album’s valley. Not in a bad way though. Adaline reminds the listener that valleys can be just as picturesque as the peaks, as she delivers a melodic masterpiece in what is the album’s true “slow song.” Harmonies and fingerpicked guitars provide a backdrop for the line, “why can’t I get over you,” which she cries out hauntingly.

Not keeping things too somber, Adaline is the most attitudinal she’s ever been on both “Last Time” and “Cross the Line.” Verses filled with sass carry these songs along, with punchy basslines and drumbeats to assert further authority. These tracks find a way to be poppy but in a way you’ve never heard before. Like, these songs could be on your local pop radio station but the next-level songwriting exemplified by Adaline would catch your ear in the way an artist like Lorde has with her anthemic hits this past decade.

The album’s finale and third single, “Ghost” includes a distinctive message in its lyrical content. The song specifically uses female pronouns in its narrative so queer women can feel directly represented.

“I want ballads like “Ghost” to speak to the LGBTQ community with an inclusive narrative that explores the heartbreak between two people in love ending something meaningful, regardless of gender,” shares Adaline. “Society unfairly projects an overt sexuality onto this community to the point where it dehumanizes, when in reality we all go through desperate moments in broken promises, betrayal, relationships ending, intense loneliness: we are the same,” she says.

This song stings like none other on the album, taking the listener inside of a faltering relationship. It’s clear that Adaline is speaking from her own gloomy experience, as she expresses her emotions as if she’s still hurting to this day. As a new music reviewer, I hate to be too self-aware in my analysis, but no other song I’ve reviewed has given me goosebumps like this. What a perfect way to end the record.

From what has to be one of the greatest Canadian pop-albums in recent years, Adaline has given listeners something truly different. Few pop artists achieve this level of authenticity in their songwriting abilities. Also, let’s talk about how seven songs is the ideal album length here. She manages to tell a story with seven captivating songs instead of having a couple of meaningless songs on the album for no real reason. As significant as this album may be the listener, Dear Illusion, was just as pivotal in Adaline’s personal life and her path to self-discovery. This album channels her intense emotions of falling in and out of love with a woman for the first time.

“There was a part of me I was keeping secret which was not only affecting my well-being and relationships, but was also affecting my music. It was starting to feel like I wasn’t writing with the vulnerability I was accustomed to. It was from this desire to be transparent that I wrote “Dear Illusion,.” I knew I needed to write songs that were honest even though I also knew it would lead to some difficult conversations with important people in my life,” shares Adaline.

In the words of PopDust, “Adaline is pop music’s best-kept secret.” Canadian Beats couldn’t agree more, although Dear Illusion, may prove to be much harder to keep shrouded in secrecy.