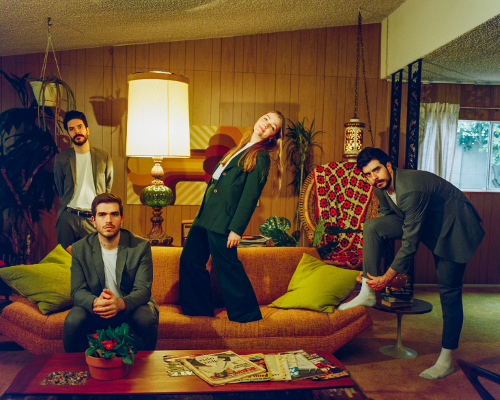 In support of their forthcoming album titled The Sun And Her Scorch, Oshawa, Ontario-based indie rockers Dizzy have released a dreamy new track, “The Magician.”

The somber pop song deals with themes of loss-induced loneliness, grief and the undying urge to bring back a loved one that has lost their life, explains frontwoman Katie Munshaw.

The song is about wanting to magically bring a friend of mine who passed away back to life. To me ‘The Magician’ reeks of naivety and innocence in a way that really hurts my heart. Hoping she’ll walk into my gig at the local pub, hoping to see her mom at Sobeys just to remember how similar their laughs were. Hoping for magic. It’s a really emotional song for me but is masked by tricky, pretty production to make it sound almost joyful,” she says of the Dreamy’s newest song.

The quartet, composed of Munshaw and a trio of brothers, Charlie, Alex, and Mackenzie Spencer, is poised to release their sophomore effort through Royal Mountain Records after their debut, Baby Teeth, quickly got the attention of music authorities nationwide and earned them a 2018 JUNO Award. Their previous single, “Sunflower” dropped in early March and has already surpassed 300,000 Spotify streams.