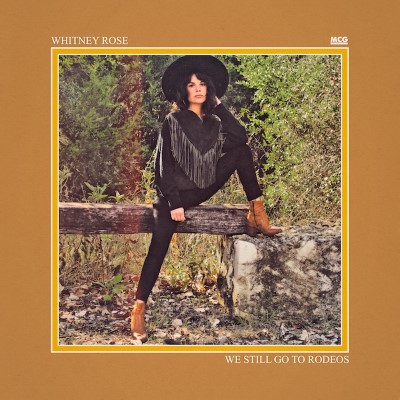 From PEI to Austin, Texas, Whitney Rose is back with another notable addition to her already impressive musical catalogue. The latest from Rose, We Still Go To Rodeos, is yet another tight, consistent, and well-executed album from the Canadian country star. On this record, the production is full and dynamic, the lyrics are descriptive and attention-grabbing, and the music is beautifully textured and cohesive. All twelve songs tell a different story, evoke a different emotion, and in some cases take on different musical tones, but are all held together by strong, attention-grabbing lyricism and a keen sense of space and dynamics in the production.

The record opens on the powerful and complex track, “Just Circumstance”. Rose sings the story of a woman pregnant with a child while her man sits in prison. The lyrics delve into the idea of being a victim of circumstance and the feelings of powerlessness that many women must feel when they end up paying for the mistakes of the men in their lives. And like every other track on the record, the production is full and all-encompassing, allowing the different voices and textures in the music to really shine through. “Believe Me, Angela” tackles the idea of moving on and learning from one’s mistakes. The music is mature and tasteful, not emphasizing ideas of bitterness or vindication, but instead playing entirely on the weight of having made and grown from the same mistakes. This feeling goes pretty far on this album too. A lot of topics are covered as this record progresses, but never does Rose devolve into the well-traveled territory of angst, despite what some of the topics may appear to call for. Instead, Rose writes descriptively, but humbly. This record is both an emotional reflection as well as a mature exercise of frustrated catharsis. “In a Rut”, “I’d Rather Be Alone”, and “Better Man” feature Rose turning things up a little bit and letting the music do some of the talking, giving the listener a taste of a few guitar solos and some banjo here and there to shake up the pacing of the record a little bit.

We Still Go To Rodeos is no doubt a benchmark for how to put together a great country record. The production is full and dynamic, the lyrics convey engaging and complex narratives, and the music is lively, upbeat, and very well balanced across its many voices. Whitney Rose continues to hone her craft and produce high quality, expertly written country music, such as what can be heard here on We Still Go To Rodeos.