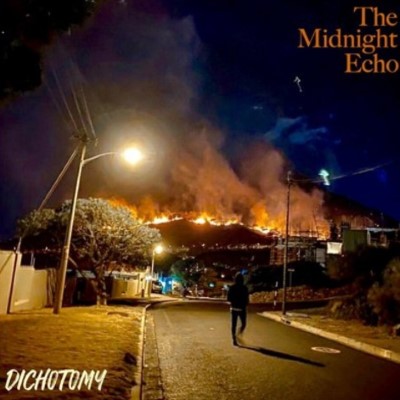 The mid-2000s were unmatched when it comes to pop-punk or emo bands being successful in the music industry. At the time, it wasn’t out of the ordinary to hear bands like Fall Out Boy, Jimmy Eat World, Brand New, and 30 Seconds To Mars on the radio. These days, the faces of those now less-represented genres have retreated into the underground where they continue to live on by dividing up the genre into innumerable sub-categories in hopes of bringing something groundbreaking to the table.

The Midnight Echo from Whitby, Ontario, is a prime example of a band that is taking steps to recreate the best parts of the genre while implementing their own stylistic influences into their songwriting formula. On their new EP, Dichotomy, they blend the anthemic, passionate staples of pop-punk people have grown to love with 80’s synth tones, giving them a vibe that similar to a stripped-down, raw version of The 1975.

If Angels and Airwaves and The Used formed a supergroup in the mid-2000s, it would sound similar to this band. This comes out in the EP’s first track, “Paris In 39,” where delayed, effects-driven guitars and pop-punk vocal melodies meet dreamy synthesizers. Following a basic verse, chorus, verse, chorus song structure, the song is an easy listen that engages the listener throughout. As all album-openers should do, it features a hook where the repeated phrase “you’re just like the others” is echoed to bring closure to the song’s chorus. “Paris in 39 explores the dynamics of human relationships and the balance that’s struck between putting too little or too much into one. Everyone has experienced, in one way or another, what happens when there becomes an imbalance, and the song is really just commenting on the importance and difficulty in mutually finding that point,” the band exclaims.

The theme of relationship-induced angst is prevalent on the next track, too. “Carbon Copy” picks up where the previous song left off, forcing the sounds of misty synthesizers and a powerful drumbeat down the listener’s throat. Peeking through the whirlwind of dreamy-emo sounds are lyrics describing the faltering of a relationship. The band’s identity becomes clear on this song when the verse makes a smooth entry into the chorus that exhibits a familiar pop melody that brings you right back to 2005. If this band didn’t already have over 15,000 likes on Facebook today, one listen to Dichotomy guarantees that they would be huge on Myspace a couple of decades ago.

The angst is taken to another level on “Victim’s Mentality.” Starting off with a dramatic intro that channels emo-tinged guitars and haunting vocal performance, it quickly becomes evident that this track is showing off a darker side of The Midnight Echo. Easily the most dynamic song on the 5-track endeavour, a huge chorus chimes in with a groove reminiscent of one of Canada’s finest rock acts, Three Days Grace. The phrase “it’s this mentality that’s been haunting me, and it cuts like the edge of a knife” leaves the listener abandoned and gives the song’s title context. The band says that they tried to accompany the songs dark theme with equally dark instrumentation. “It is based around the idea of how people at some point or another in their lives will try and play the victim. Having seen this in our lives before we tried to encapsulate this type of mentality into a song to show how damaging it can be,” says The Midnight Echo of the album’s halfway point.

“How To Escape Reality” takes the listener from the dark depths of “Victim’s Mentality” and secures them into a more upbeat, lighthearted atmosphere. The band does their best MGMT impression right off the bat with a robotic electronic synth. It truly sets the mood as the song unfolds into the most fun experience on the EP. “How To Escape Reality” takes you out of reality for a brief moment as the song’s final chorus is introduced with electronic drums, giving you insight into how diverse this band’s style is. Compared to the angsty lyrical content of previous tracks, this song has an entirely separate meaning, the band explains. “This song focuses on the idea of the art medium itself. It discusses how important art can be for most people from books to movies to video games and also to music. We use it as something to get away from our everyday lives and as a way to escape reality, even for just a few moments.”

“I’m not an open wound, I’m not a broken home.” This line sticks out like a sore, but healing thumb on the album’s closing track, “Fever Dreams.” The conclusion of Dichotomy sees the band in a state of self-reflection as they dwell on where they currently are in their musical journey. As emerging indie artists, it can be tough to stick out from the pack and to keep moving forward. The Midnight Echo recognizes this and reckons that a way to overcome these obstacles would be to face them head-on and write about them in a song. “Fever Dreams” moves at a slower pace so the introspective lyrics can be heard loud and clear.

The Midnight Echo’s latest effort reads like a book. It kicks off at a fast pace, reaches its climax about halfway through, and ends with a thoughtful closing statement. The album’s title, Dichotomy, is defined as “a division or contrast between two things that are or are represented as being opposed or entirely different.” On the record, The Midnight Echo has created a contrast between themselves and others in the genre with a unique but all the while familiar sound, making them an entirely different representation within the genre.