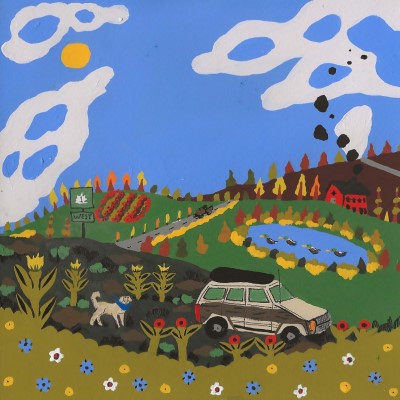 As a whole, it can be argued that modern country music has become over-saturated. The formulas used to create the next hoedown-banger have now been the same for years, in turn creating a country-tainted cloning facility that endlessly pipes out similar song after similar song. Luckily, many acts have recognized this phenomenon, or lack thereof, and have incorporated other genres, ideas, and quirky shticks into the fold, making the more underground side of western music as diverse as ever. One of the faces of this movement is the newly established Joey O’Neil, who sets up folk, lo-fi, and country music on a polyamorous blind date and finds out they’re all compatible on her latest release, Ever Ahead.

In Yukon-based Joey O’Neil’s sophomore LP, she taints the still water that is new country music with a signature blend of songwriting that echoes the very foundation old-school country was built on. Writing about topics like her “trusty steed,” which is her faulty old truck, O’Neil is literally drawing straws from the hay bale of classic genre stereotypes. The catch is, though, she’s doing this intentionally, delivering an ironic but all-the-while enjoyable experience in her plot-focused record.

Like I said, O’Neil hails from the Yukon Territory. Whether you’ve been there or not, her music just sounds like the essence of the Yukon. The album-opener “When I Forget,” tells an emotional story where O’Neil confesses “it’s easy when I forget,” alluding to the aftermath of a broken relationship. She also cleverly relates Yukon’s unique atmosphere to her own feelings with lines such as “I forgot how dark it gets” and “I forgot how cold it gets.” Featuring high-pitched keys that come across like wind chimes and a drumbeat that references lo-fi legends Duster, O’Neil is telling her personal story in a new way.

In terms of pacing, Ever Ahead is filled with an equal balance of peaks and valleys. The second track, “Hitchhiker,” is a quick little dandy with a fast tempo. The abruptness of this song doesn’t fool you for long though, as the instrumentation still promotes self-reflection in the listener. This song is perfect for introspectively looking out of a car window on a road trip.

“Manitoba” is sweet. “I’m as fragile as a flower” and “I’m a sucker for nostalgia” are fitting choices of words for the way this album makes you feel. “I’ll Only Smile When You’re Gone” is by far the sassiest song you’ll find here. With attitudinal, emotional spews of imperfection on this track, O’Neil sounds like if Courtney Love formed Hole in the lonesome territory of Yukon. O’Neil quickly sheds her thick skin on the next track “Badlands,” though. While the entire LP is sewn together by a moody threading, this song is seriously sad. The heartbreaking line “I’d rather hold you with one hand than hold nothing with two” illustrates the passing of a loved one. That chilling phrase may just be the best part of the record.

Joey O’Neil should be praised for her choice to make most of these songs less than three minutes in length. She manages to make an album without any standout dynamics still have incredible repeatability because nothing drags on for too long. Another ode to her songwriting is the fact that she really doesn’t include a chorus in any of the 10 songs. Instead, she relies on her way with words, painting vivid pictures in the mind of the listener.

These images are so vivid because she writes about the most simple, relatable topics such as her always-reliable vehicle. “Fixer Upper” and “My Trusty Steed” are songs about her beloved truck that appears to be living out it’s last days. The candid word choices and basic rhyming schemes almost make the songs sound like nursery rhymes. The listener is able to easily see through this though, and realize that O’Neil is being ironic in these entry-level rhymes. It’s like she’s doing something truly progressive by going back in time and digging through the most mindless topics of old western-style music, and then making them into art in the year 2020.

This bittersweet story is concluded by “Maybe Tomorrow,” originally written by Terry Bush in 1977 and known universally as the theme song for The Littlest Hobo. Being new to the music-writing world, I try hard not to sound too authoritative in reviews, but I’m making an exception here. This is awesome. I love when artists include cover songs in an LP, and O’Neil’s rendition of “Maybe Tomorrow” sums up the album like no other cover could. Although the song belongs to another, if The Littlest Hobo didn’t exist, I’m not sure many would have even guessed that she wasn’t the original composer of the song. A quick look into O’Neil’s persona; story makes the decision to include this track even more meaningful. Originally living in Toronto, O’Neil escaped the hustle and bustle and took to settling in the quaint town of Dawson, Yukon. It’s as if she’s using this song to describe herself as The Littlest Hobo, always being on the go. Typically, it’s a bold move to end an album with a cover, but when talking about an all-time classic of a song that suits the album thematically, why not?

There’s something to be said about how O’Neil successfully made every song mirror the album cover in this effort. While talking about the most basic of topics, she finds a way to compel the listener for the entirety of the release without including a true chorus in any song. Again, this is found in her ability to communicate stories with her clever way with words. For those who have ditched physical books in this modernized world, this album is basically an audiobook narrated behind bluesy, western melodies.