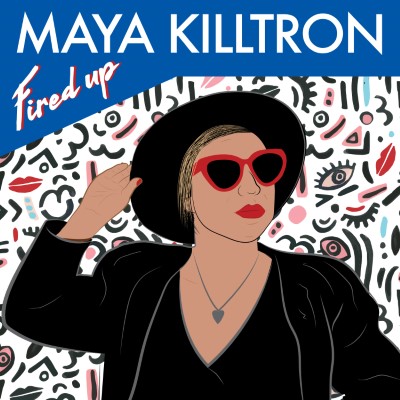 Funk music is a genre that can seem both timeless, but also intensely retro. It can be difficult to separate the now almost comically flamboyant images of artists like Stevie Wonder, Bootsy Collins, and Rick James, from what is really a highly technical and carefully orchestrated style of music. As well, the path to a sincere modern adaptation of 80’s-styled electrofunk can often find itself obscured by the “Uptown Funk’s” of the world that tend to reduce the genre to canned slap bass patterns and call-outs that feel like parody. But every now and then, an artist comes along that emanates that authentic funk swagger and energy that makes the greats of the past truly timeless. That is exactly what Toronto’s Maya Killtron been doing for years and has done again on her latest EP, Fired Up. This four-track collection touches on a variety of familiar funk themes and tones, but with tasteful modern production and arrangement, not to mention her powerful, soulful singing voice.

The first track on the record, “Fired Up”, is a bouncing, synth-driven opener that is solid front-to-back. The vocals are catchy and empowering, the chorus is exciting and memorable, and all the hooks hit just right without tipping into excess. It can be easy for the lyrics and soul of funk to get lost in the synths and glitter but there is no doubt that Maya Killtron’s voice is what is guiding this track. “The Middle” is the true gem of this EP. It’s groovy, bombastic, and has an absolutely infectious vocal flow that is perfectly punctuated by the horns and keys. This track also boasts the best hook on the record with the horn break that hits around the 2:45 mark of the song. It’s simple and tasteful, but still crazy hard-hitting; a common theme on this record. Fired Up touches on a number of funk textures, but doesn’t fully sell itself to one or the other. Each element subtly takes its turn in the spotlight and then falls right back into the pocket just as quickly. “Little Bit Of Your Love” slows the pace down, riding on a simple 808 drum beat under a light cloud of synth and jazz flute near the track’s back half. This song hears Killtron touching on her appreciation for the R&B of the 1990s. The record closes out on a remix of “The Middle” from American funk producer Diamond Ortiz. This remix leans pretty hard on the Bootsy Collins influence, cranking up the synth stings and boosting the bassline, in case you prefer your funk with just a bit more punch.

This latest release from Maya Killtron hits hard, but it doesn’t beat you over the head. Killtron is truly a student of the genre and her arrangements and vocal delivery speak to that fact. Fired Up, for a record of only three songs, really is a textbook display of new funk that not only fits in with the greats from the past but also plants itself firmly in the present and establishes Maya Killtron as a leading voice moving forward.