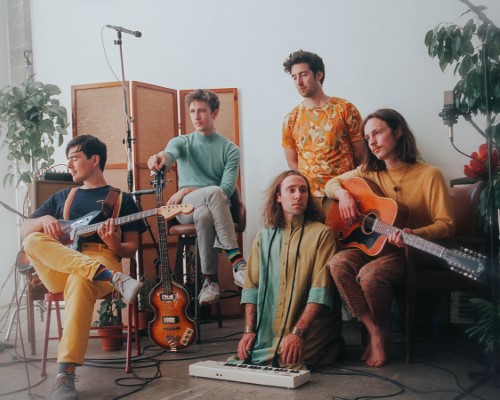 Victoria, BC-based experimental-pop collective, Cartoon Lizard has teamed up with us at Canadian Beats to unveil the music video for their single, “Stikine River”.

“In the summer of 2016, I found myself attending a distress call in the midnight hours while on the Stikine River, a wide and fast-flowing vein that runs from Telegraph Creek, BC out into the ocean’s mouth near Wrangle, Alaska.  The distress call was made by a man in his late 30’s who had been repeatedly rammed by a larger fishing boat in the dead of night.  This episode was one piece of a 38-year-long feud between two colonial fishing companies, who, left to their own devices, have been taking cowboy-esque advances against each other in order to lay claim to a part of North America’s natural resources, the wild Chinook and Sockeye run.

Upon entering this distress call I was met not just with the vision of a wounded and unconscious fisherman, but too, their arriving family and rifles.  What followed was a brief yet infinitely long boat chase with gunfire towards me.

After returning to society, I found myself uncertain of my existence within my earthly body in a form of Cotard’s Delusion.  I propelled myself towards dangerous adventure and accepted tickets into psychedelic realms.  Months into this state I developed hallucinations of sound and light, later found to be early symptoms of chronic ocular migraines which led me into depression for the coming years.

This song is about that journey and the line between surrender and giving up.”

The music video, which was shot by Ritchie Hemphill, symbolizes both a separation from innocence as we pass through the many trials of adulthood, and too, the painful and confusing separation from relationships which help us carry the weight of trauma.

Check out the video below, and find out more about Cartoon Lizard via our Five Questions With segment.

Care to introduce yourselves?

Cartoon Lizard is Ritchie Hemphill, Trevor Lang, Brennan Doyle, Alex Maunders, and Shilo Preshyon. We are a five-piece collective of writers/multi-instrumentalists/producers each with our own distinct voice and style. We employ a completely DIY approach and are unbound by roles, resulting in an ever-shifting form and sound.

Everything is an exercise in careful collaboration and navigating conflict in a healthy way with the intention of rising above our individual selves to make something greater than the sum of our parts. No decision is taken lightly and we do everything DIY so there is lots of compromise and dialog necessary to fulfilling our goals. We are fundamentally a family though and despite any disagreements we may encounter we’ve built up a foundation of love and understanding that keeps us working. It all results in intricate and multi-coloured compositions designed to appeal on a surface level as well as reward those who unearth it’s hidden layers through repeated listens.

Our shows are somewhat chaotic but immersive and emotional. We have different kinds of sets ranging from acoustic and ambient to frenetic psych-pop energy that we cater to each show.

Almost any song off of Bless You, Thank You would be a good choice as they are all an amalgamation of our individual personalities and styles. Everybody Name Joni is a short track carrying the volume of vocal harmonies and experimentation that brings our members together.  If you’re in for a dreamy pop single, however, Bus Stop World feels like our largest production feat.