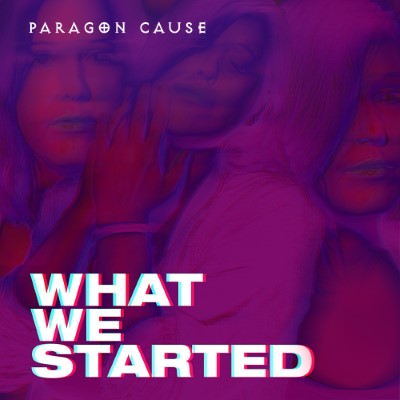 To attach a narrative to a collection of music is far from a new concept; it seems to be a natural inclination for composers and artists to want to contextualize their work into some sort of self-contained arc of themes and events. In many cases, one is simply attempting to explore different backdrops to their music, hear it through different filters and from different thematic starting points. But to have a narrative album that evolves and matures throughout its course is no small accomplishment, and that is what Paragon Cause have done here on their latest record, What We Started.

What We Started is greeted with a wave of 80’s-style synth stings over a simple, retro-sounding drum machine beat on the opening track, “Lost Cause”. Right out of the gate, however, and despite the light and happy introduction, Paragon Cause throws the listener right into the dark and emotional storyline that gives this album its identity. The lyrics of “Lost Cause” point towards a theme of abuse, vulnerability, and the ugliness of lost love as one half of the duo, singer/keyboardist Michelle Opthof, sings of someone “crushing souls to replace things you’ve lost”. This severe and sobering theme of the damage two people in a relationship can do to each other carries itself throughout the course of the record, helping the sound, in turn, mature, sober, and become noticeably more severe by the end of the record. What We Started quicky forgoes the dreamy, ethereal dream-pop haze as the intensity of the record begins to ramp up. “Silent Prayer” features Opthof’s powerful voice belting out over a melancholic piano melody and a frantic breakbeat drum pattern. Much of the record proceeds in this way, each track an exploration into a different avenue of Paragon Cause’s sound, such as on “Without You”. This track comes straight out of the Joy Division playbook, a heavily post-punk influenced song that comes with the idea of a new life, singing that “I’m crazy for all the right reasons”, because “I’m better off without you”.

The record carries on to evolve in this way, reaching new avenues of self-exploration and reaching darker corners of their music, such as the industrial-tinged “Time For Action”. It is this combined evolution of the lyrical themes alongside the musical tone and atmosphere that help What We Started succeed. Each track on this record strings you along and keeps you hooked into this highly personal narrative and each song hits you in its own distinct, yet very potent way.