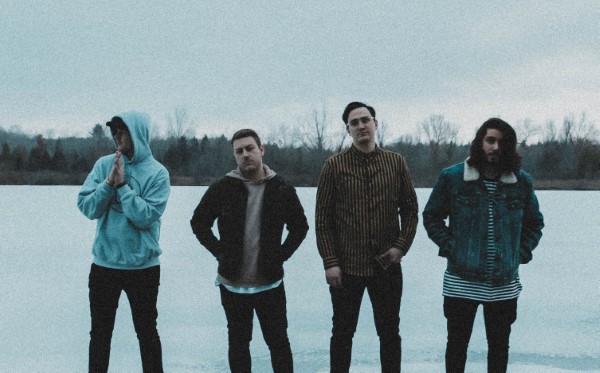 Post-rockers Nightwell have released their debut self-titled album; a personal introspection centered around themes of grief, love, and friendship.

The band is made up of vocalist Jason Emsallem, guitarists Kyle Marchant and Cole Hardy, and drummer Terrance Pettit. While they originally played in different bands, the Toronto music scene brought them together in 2015. In 2019 they released their single “Drive” which Hardy says “was a real test on how the band would develop musically and melodically.” They continued to work together on their sound with the 2020 single “Confident” – it worked so well they decided to keep both songs on the album.

We caught up with the Canadian rockers to find out more about their band’s story and what they hope to achieve.

Take us back to 2015, when you were all intertwined in the Toronto music scene. What were those early days like getting to know each other?

Cole and I (Terrance) met through a mutual friend back in 2015 which was the beginning of Nightwell. At the time we both played in other bands, but we quickly became very close and Cole ended up joining the band I was in. We both ended up meeting Kyle while recording our last record with that band. Kyle was the assistant engineer for that record and through meeting him with that band, he joined us for what was to become Nightwell! We decided to take our project much more seriously in 2017 and started working towards doing a record, putting together a rough version of what is now “Runaway.” After putting together what we feel are some of our most creative works, Jason joined the mix. We met him when he was still performing in his previous band “Pfloog”. That band had just come to an end so we decided to work with him, and words can’t describe how perfect of a fit he’s been for the group.

What was the process like during the recording of Drive? Did it take a while to find your footing as a band?

Coming together as a band felt pretty natural. We’ve all been playing and writing with bands for a long time, and on top of that, we’re all good friends outside of music. Drive itself was another song we’d had written from very early on. We did a small rework of the song with producer Paul Marc Rousseau and Jason came at us with his first attempt which is more or less what you hear on the record now! All in all, this whole process has felt very natural and all of us work together so well as a unit.

And now you have a full album released to the world – has this experience met your expectations?

The response to our record has been overwhelming! We came together trying to play some music as a group of friends and on our first release, it’s going above and beyond our expectations. All of us have worked very hard towards getting this band a solid release and a solid name so it’s extremely uplifting to see the hard work pay off. We’re very thankful to everyone who has been supporting us so far.

Which songs on the album would you say you have the closest connection to? Are there any in particular that you hope your fans will resonate with?

I feel that all of us have a connection with a different song which I think is a beautiful thing about this record. Jason for example has a huge emotional connection with “Ball in a Box” which is a song about his fathers passing and how it’s affected his life. I personally feel that there’s something to take away from every song on the record. It’s our hope that anyone who’s going through any kind of emotional crisis could listen to these songs and find relief. We want our music to be a positive influence.

Are there any lessons you’ve learned through this process that you’re going to take with you when you begin working on your second album?

100%. This release has been a huge trial for us learning the best ways to connect with our fans as well as building our brand and giving our music it’s time to breathe. We’ve taken everything we’ve learned from this release and have already started applying it to our future works. We’ve already begun working on our next record and we’ve got some solid riffs that will be an amazing follow up to this record.

As a Canadian band coming up in the current industry, are there any artists that you would consider inspirations or career models you hope to follow?

There’s a fantastic community of musicians in Canada which we are very proud to be a part of. Some names we would love to mention would be bands such as rarity and locket. They are both very hard-working groups of individuals doing the best job they can to offer the world some incredible product. Other Canadian inspirations we pull from would be Silverstein and Comeback Kid. Both bands are a mainstay in the Canadian music scene, putting out consistently good music and we’d love to see ourselves doing the same for the foreseeable future of this band. Outside of Canada, a huge inspiration would be Every Time I Die. They’ve done an amazing job at creating something unique and positive for the music scene that fans really connect with and that’s our goal.

From our Toronto music scene, we really admire Rarity. They do the most in terms of interacting with other bands and the community around them and we strive to be a beacon of example for other bands to follow. In the long term, we can’t ignore how big of an impact Silverstein has had on the music of our generation and the Toronto “post-hardcore” sound. They have progressed with the times and now their new record is a straight banger, we would like to one day have that kind of impact and longevity.

Ultimately, what do you hope to achieve in your careers as Nightwell?

I think with this first step we achieved a major goal we had in mind. Write an album that is emotionally driven, that speaks to our fans and sounds consistently. This was our way of saying hello to the scene. Getting to know our audience and try our best to connect with them. Moving forward with the band’s career, our goal is to take what we’ve learned through our time in the industry and become the next generation of inspiration for people getting involved in the music community, much like the people who inspired us when we were kids.