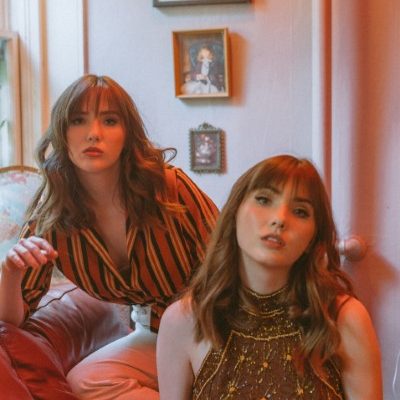 Vancouver pop duo FIONN has released their latest single, “Mattress on the Floor” on April 17 through 604 records.

FIONN, consisting of twin sisters Alanna and Brianne Finn-Morris, have become distinguishable faces in the Canadian pop world since their debut track “Skeleton” dropped in 2017 and peaked in the Top 5 on the CBC Music charts.

“Mattress on the Floor,” their first release of 2020, introduces somewhat of a new direction for the pair. Stylistically, their music has deep roots in traditional folk music, but their newest track strays into the alt-pop troposphere, reaching out with razor-sharp hooks and a sense of moodiness that lingers throughout the entire track.

A visualizer that features classic-looking film footage will accompany the song upon release. The nostalgic visuals, looking as if it were a montage of memories, works alongside the new track in order to resonate with any subject it encounters.

Canadian Beats caught up with the duo to ask them about their newest track and what’s in store for the future.

While “Mattress on the Floor” still has the ‘FIONN’ charm that has earned you great success before this point, this track sees you dive deeper into the alt-pop genre than ever before. What guided your decision to switch-it-up on your latest single?

Our music in the past definitely was a lot more folk-rock than alt-pop, and in all honesty, we just wanted to try something new! We appreciate all genres and we’re feeling more inspired by music with pop elements when we were recording our latest songs.

I couldn’t help but notice the sense of moodiness that shows itself for the entire song. Phrases such as “Living my second-best life / but I feel just fine” stick out as emotional, yet effortless hooks. What was the thought process behind the lyrical content in the song?

I wrote “Mattress on the Floor”  when I was feeling lost and confused about my direction in life. When I graduated highschool, I created my own personal timeline thinking that I knew exactly where I was going to be in X amount of years. I’ve always had anxiety about the passage of time, and was a little bit of an A-type when it came to planning out my future. Of course, life never turns how you expect it will, and I found myself a few years later in a situation I did not originally want. I felt very unsure about my path, but at the same time, I was having a blast partying with friends and falling in love. People always talk about “living their best lives” which I definitely didn’t feel I was at the time but was lucky enough to find out that a “second-best life” though unexpected, can be much more fun!

Can we expect more of this gloomy lyrical content in future releases?

Although “Living my second-best life” does sound gloomy without context, in the song the lines right after it are “but I feel just fine, from the floor I feel free”. I was feeling sad at the time, but also extremely liberated! We do throw in occasional gloomy lyrics when we write, but our upcoming EP is overall more light-hearted.

Speaking about future releases, what does the rest of 2020 look like for you guys? Obviously a lot of plans have been adjusted due to the COVID-19 crisis, but what’s in store for FIONN, ideally?

Of course, like everybody else, we have felt the wrath of COVID-19 and have had to cancel multiple shows and a music video! We were extremely disappointed but immediately started trying to find ways to work around social distancing. Before the crisis really took hold, we were working on songs for our next album, and are continuing to do so through zoom conferences. Fortunately,  our release schedule is going to stay the same!

“Mattress on the Floor” has its own visualizer to give it some company upon its April 17 release.  The visuals themselves have a vintage vibe to them, was this intentional? How does the video translate to the song?

We wanted the visualizer to portray the feeling of being young, lost, confused and in love. The vintage vibe was sought out purposefully as we wanted it to feel a bit nostalgic. The emotions we are talking about in the song are timeless, and we wanted that portrayed in the video. We also just have a love for vintage style!

Does being twin sisters bring any sort of special dynamic to your act? Like the classic twin stereotypes suggest, are you guys usually on the same page when it comes to songwriting and making decisions for the band?

We think that being twins definitely adds to a lot of what we do. We are so in tune with each other, that singing, performing and bantering together has always been a breeze. With that being said I don’t think any two people on this planet could be completely on the same page at all times! We usually write our songs separately as we tend to bicker about little things. Lately, we have been co-writing with others though and find it easier to do when there is a third party, as we will obsess and argue over something as small as 2 BPM if it’s just the two of us! Being in a band with your twin also means you always have someone celebrate and be with when things are going well. It’s never a dull moment!

“FIONN” is a band name that begs for answers. What’s the meaning behind your name?

“Fionn” is our last name “Finn” in the Irish language! Our Dad traveled to Canada from Ireland in a showband, so we’ve always felt the connection there.

What have you guys been jamming lately? Have any of those musical influences showed up in “Mattress on the Floor?”

We have recently been listening to a lot of Rex Orange County, Phoebe Bridgers, Vampire Weekend, and Dua Lipa! Our music tastes do change frequently, and when “Mattress on the Floor” was being recorded we were listening to completely different artists. Back when we were working on it, we were feeling super inspired by Lorde’s album “Melodrama”. We have always really appreciated  Lorde’s lyrical integrity and catchy pop hooks, so we really tried to channel that for “Mattress”  but in our own unique way!