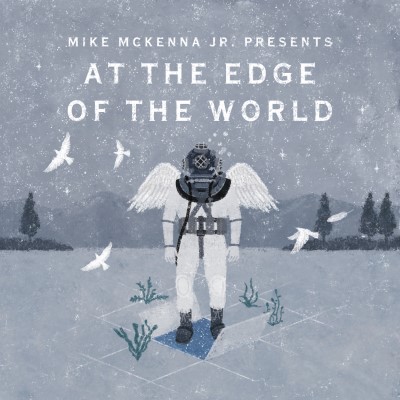 As the old saying goes, the devil you know is better than the devil you don’t. When it comes to songwriting, familiarity is what gives a piece of music repeat value as it leaves listeners wanting to recreate a passed feeling over and over again.

At the Edge of the World, the latest effort from Montreal-based folk artist Mike McKenna Jr., sounds like a book your parents read to you in your childhood years. McKenna’s captivating storytelling recreates the very blueprints of our youth, with simple hooks and melodies that resonate with a past self, causing one to enter an honest state of introspection upon listening.

At first glance, the record is not anything completely new. The melodic passages found throughout McKenna’s eight-song album are pretty standard when it comes to folk and pop music alike. That’s the appeal, though. I think McKenna knew exactly what he was doing when he erected highly accessible song-structures and adorned them with his own style of nostalgic storytelling. This record is a standout example of why easy-listening music is so easy to listen to.

The album kicks off with the title track, “At the Edge of the World,” which McKenna released as a single back in late February. Immediately, a jangly acoustic guitar is heard strumming a melancholic tune. Short lived, though, as a powerful snare drum soon chimes in and signals the album’s commencement. It doesn’t take long to realize that McKenna’s raspy, intimate voice is a perfect fit to narrate this novel of an album. No, by the time the first chorus hits, McKenna’s vocal range is realized when he spews out “It burns so bright / when you’re close to the sun / If it melts your wings…” With that, the tone is set, and the listener is sent back into a place they once were.

McKenna says that the inspiration behind the track came from a news article about one man’s experience as a first-responder of the crash of Swiss Air Flight 111 near Peggy’s Cove in 1998 and how it changed his life. While this is an intricate storyline to illustrate in just a few minutes, he does this affectively while still leaving the song’s meaning entirely up for interpretation by the listener. The calmness of the album opener is challenged a few times, mainly with the mid-song guitar solo section and when the final chorus bleeds out into the cinematic instrumental break. However, its soothing nature is fully restored as the song closes with its opening hook. Kind of like a lullaby. The entire soundtrack is sort of like a lullaby, really.

“The Town” is the second track of the record and was also released as a single. While keeping the album’s soothing nature, this song has a particular groove to it: a metronome-like drumbeat in 6/8 (mostly) that sticks around for the better half of the song. It drives the song forward, while still leaving room enough for McKenna’s stories to shine through in the verses. Lyrics such as “So pure in my youth / bullfrogs and rubber boots” and “Well, I always have a familiar place to stay / in the town I was born” are direct examples of McKenna’s way with words that places the listener in someone else’s shoes, or in this case, rubber boots.

Moving onto the middle section of the album, “Caught in the Middle” sticks out, featuring distorted electric guitar played over the dramatic tale-telling. “Pale White Moon” is a song that McKenna told Canadian Beats himself that if he could only choose one song of his for anyone to hear, it would be this one. This track undoubtedly features the most memorable chorus in the entire album, with a vocal melody reminiscent of genre-giants like Mumford & Sons. While not released as a single, this song’s chorus is catchy enough to be considered the climax of the eight-song endeavor. The song is the shortest track of them all, but it too has its own narrative:

“It’s based on the story of a young folk-singer named Taylor Mitchell, who died while hiking at a national park in Cape Breton just over ten years ago. I was still living there at the time working at a Christmas tree farm, so we had heard about it through the grapevine. It really struck a note with me, especially since she was a touring musician, so I felt compelled to pursue the idea as a songwriter,” says McKenna of the song.

While “Pale White Moon” could be considered the peak of the album, it’s direct predecessor on the track-list on the album, “The Wolf,” could be considered the valley. Not at all in the sense that it’s a bad song, but in the sense that it’s so filled with so much doom and gloom. The laid-back guitar work and hypnotizing murmurs from McKenna remind me so much of Mount Eerie’s “Seaweed” which is considered to be one of the saddest songs made in recent times.

The last few songs begin with “My Room,” a tune that stretches over five minutes long and exhibits a bright-sounding electric guitar strummed for the whole ride. The presence of a woman’s voice can be heard most prominently on this track, working in tandem with McKenna’s voice in harmony to add an emotional punch. “High Ground” begins with a banjo and is the closest thing to country music on the album. This song is noticeably upbeat, a rarity amongst these tracks.

At the Edge of the World closes with “Working Man,” a dramatic ending to a dramatic collection of stories. No percussion is used on this one, just McKenna’s girthy voice to rock you to sleep at the end of this half-hour journey. Almost ominously, the guitar rings out for ten whole seconds after the last note, letting the listener truly take all of the eight songs in.

Overall, Mike McKenna Jr.’s sophomore album is a Canadian-made gem if you’re looking for a folk album that does a great job at storytelling. Not only that, but the stories told by McKenna are those of Canadian people, which gives it a down-to-earth aspect. While not the boldest album ever made, McKenna manages to play it safe while also being able to instill true feelings in the listener here.