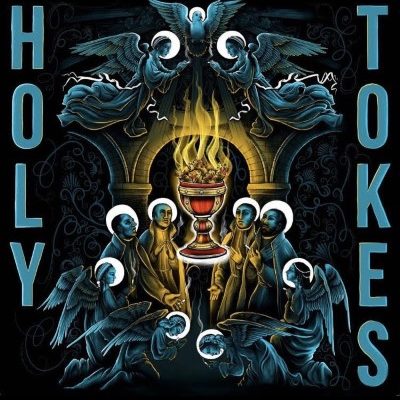 In the last couple of decades, the alternative rock genre has mass-produced an innumerable amount of talent, namely the industry giants Tame Impala, The Strokes, or even Canadian greats, Japandroids. These poster boys of the alternative world have inspired a seemingly endless vacuum of newer acts trying to borrow from their impressive repertoire while incorporating their own gimmicks into the fold.

However, what holds the majority of these new groups back is the fact that they’re not doing anything unique enough that sets them apart early in their careers.

Insert rock outfit Holy Tokes from Vancouver. While labeling themselves as simply alternative rock, their self-titled debut EP says otherwise, and instead forces a genre-less agenda upon the listener, blending distorted guitars with dance-beats and groovy bass riffage. Layered on top of all of that are vocals by frontman Mark Lingelbach who delivers an incredibly distinctive performance throughout the six tracks. Putting these aspects together as one, Holy Tokes has done something out of the ordinary, and that’s something bands need to do in their first release. This band recognized this and took off with it here.

The EP kicks off with “I Ain’t You’re Momma.” Yeah, the song has a major grammatical error in its title. What surely is an intentional decision by the band makes the album-opener stick out just a little more. I’m not sure of the exact science behind it, but the song’s imperfect name makes total sense as soon as you take an ear to the tune. Wasting no time, it starts off with a heavy-hitting intro, then almost immediately bleeds into harsh screams from Lingelbach in the verse. The song becomes more cohesive when the chaos in the intro turns into funky instrumentals and rhythmic singing. Upon first listen, the vocals were confusing. Not in a negative way, but just because our minds as listeners want to be able to say oh, this band sounds like that band, and honestly, nothing came to mind initially. As the album progresses, parallels between bands like FEAR, who helped shaped the hardcore punk scene in California in the early 1980s and Parquet Courts, who’s 2018 album Wide Awake! received critical acclaim due to its quirkiness, became evident. Taking elements from different nooks and crannies of the music world and expanding upon them gives Holy Tokes a fresh new sound, even if the listener doesn’t understand exactly what’s going on at first. Repeatedly chanting the line “you’ve got to wake up earlier in the day / to pull a fast one like that on me,” over undeniably groovy instrumentals, the album is bold from the start.

The energy only keeps up in “Lions (Break Out),” with a sudden dance-inducing drumbeat. Stacked on top is lead guitar by Trevor Morely, who makes a name for himself on this EP by smooth hammer-ons and pull-offs. This song flows a lot more like a typical pop song would, establishing a catchy vocal melody in the chorus.

“Feelings on Ice” takes a turn for the psychedelic. Reverberating guitars reminiscent of Mac Demarco, this particular song may make you want to take a holy toke, if you know what I mean. Quickly transitioning from the spacey atmosphere the body of this song provides into an emo-sounding outro, this track is just another piece to the puzzle that Holy Tokes has laid out for listeners to tackle.

The next two tracks were previously released as singles by the band in 2019, and it doesn’t take a lot to see why. “Killing Time,” unlike its title, makes use of every second. With more grabby riffs right off the bat, it seems as if Morely will never run out of these pentatonic licks, and drummer Alex Moscrip and bassist Daniel Lomonaco do an outstanding job at keeping up. Through the distorted vocals, standout lines like “Tell me what could be worse, killing time / spending it like it’s of no worth” shine through enough to justify the band’s decision to make a lyric video for the single.

“Pay the Rich” was the first single from the EP and the first the band ever released to major streaming platforms. What sounds like more of a laid-back track in the first half of the song turns into a hurricane of distorted vocals and speedy instrumentals towards the end. This song has a little bit of everything, which in retrospect, was fitting as their first release.

Holy Tokes ends with more of the same. “Heavy Pedal,” does its job to sum up the album by taking bits and pieces of previous tracks and whips them up into music stew. Still appetizing though, the song features a whaling guitar solo that sticks around for quite a while after some jazzy vocal adlibs are added into the mix.

All in all, the first effort by Holy Tokes is memorable, and it needed to be. While there is some variety to the songs, the album really does well at staying on one level throughout, while still feeling like it’s progressing. The album never gets too soft or too powerful, and while it can be argued that it needed these dynamics, I feel like everything heard in this EP was done meticulously. This release raises many questions, but perhaps the biggest one is: Given the band’s name and the album artwork, why did this album not drop on 4/20?