Five Questions With Krosst Out 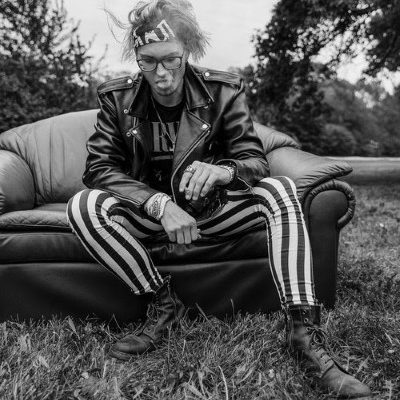 Toronto, ON-based grunge trap and alt-hip-hop rocker, Krosst Out is back with a new single, “Funerals”. The track drops ahead of his upcoming album, Phone Calls With Ghosts, which is set to be released on June 26, 2020.

“Some kids treat piano lessons like a chore, but I treated them like a lifeline,” Krosst Out — nee Aaron Siebenga — offers. “They were my way out.”

The sentiment — and its translation into “Funerals” and Phone Calls With Ghosts — are in reference to his upbringing in the small Northumberland County town of Campbellford, Ontario, population 3,500.

“‘Funerals’ was the first song for this project I ever did, and it hit home with me,” Krosst Out shares of the revelation. “As the project grew, I built around this concept of talking to the people that don’t know who I am anymore, as well as for the people currently in my life, letting them know where I’m at.

I feel as though you get to a certain point as an adult where it suddenly dawns on you that you’re no longer who you were when the people ‘back home’ knew you,” he reflects. “You’re different now, and that’s ok.”

Check out “Funerals” below and find out more about Krosst Out via our Five Questions With segment.

Sure, My name is Krosst Out, I’m an alternative hip hop/grunge rap, genre-bending artist based in Toronto, ON.

As a kid growing up in Campbellford I was really into the alternative rock sound that was being played on the radio, add in friends that are huge metalheads, and myself that found hip hop at age 12. I had bands like Rage Against The Machine, Nine Inch Nails, System Of A Down, and Marilyn Manson on constant rotation. At the same time, I was going down the rabbit hole of hip hop, from Nas, Notorious B.I.G, Eminem, Rakim, and more. This just ended up having a huge impact on who I am now. I picture myself as the guy that has never really fit in, the rebel with a leather jacket in church, the all black in summer, the too rock for hip hop, but too hip hop for rock n roll type of person.

I always describe my music as an amalgamation of different genres. I take what I listened to as a kid and use it as a stepping stone to create something new.

My writing style is first and foremost, that of an MC. I believe that even though I do bend genres and I’m known for that, writing is the most important part of the song for me. I know the producers I work with are always going to do their job and so as a hip hop artist, I need to do mine and not let the track down.

The new project I’ve been working on is still very much me, but also an evolution. I took each instrumental to a new place and allowed myself to get more personal, which is something I really hadn’t done too much up till now. It also has allowed me to bring out more of my rock influence. Which is something I’ve been wanting to do for a while. I wanted to explore that angle but also bring my traditional hip hop roots along with me.

Unfortunately because of what’s going around with COVID-19 any shows I might have been planning or booked for aren’t happening. Hopefully, the fall will yield a small tour but that’s all up in the air.

My shows are always super high energy. From running around, jumping on drum sets with the drummer still playing, to jumping or hanging off something high up. I’ve had several occasions where I have either injured myself and at one point even burst a blood vessel, but it’s all for the fun of it.

I would immediately point you to my new song “Funerals”. Every song I put out is a reflection of what and how I’m feeling and is my way of working through it, in that moment. It’s a super personal song for me and so if you really want to get to know who I am now and where I’m going sonically then I think this song is a great way to do that.

I’ve got a laundry list of really dope local artists but here are a few.

Melotika is on top of the list. A singer/songwriter based out of Toronto, her vocal range along with creativity are crazy.

Taabu is incredible, he’s been my drummer on some shows but also does so much dope production and just such a diverse artist.

Jor’Del Downz is one of the most diverse and talented people I’ve ever met. Producer, drummer, singer, rapper, the man really does it all.

Of course, there’s way more, that’s just the tip of the iceberg.