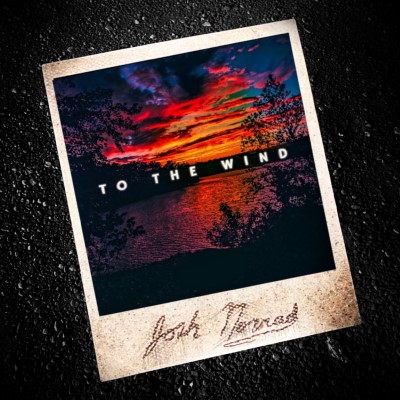 New Brunswick’s own Josh Norrad has recently released his new single, “To The Wind”, which was written by Doug Folkins and James Hoppe. He had the honour to work with multi-award winning and multi-platinum selling producer Jason Barry, along with members of Dean Brody’s award-winning band, to record the single.

Josh first met Barry at the MNB Awards in 2016 where, after showing him a few of his songs, they decided to work together.  SOCAN connected Josh with songwriter Doug Folkins for a co-write, but it was while he was going through Folkins’ demo tracks that he came across “To the Wind”.

“The song immediately captured me, with the lyrics painting images in my mind, pulling me into the story of the song.  The energy steadily climbed as the song went on. I remember getting chills when I first heard the powerhouse chorus and I sat there saying ‘this is the song; this is the song’. “ says Josh of the single.

Barry, who performs in Dean Brody’s band suggested that his fellow bandmates perform on the track, as well.

“What I love most about the song is that it is real. It really captures the feeling of young rebellious passion, but it does so in such a simple way.  I have been a car guy forever so the mention of a speeding car burning down a dirt road also caught my attention. Since I grew up in the country along the banks of the river, I can very much relate to every lyric. This song talks about 2 people who are living in the moment, and that is something we tend to not do enough of these days. I hope this song will inspire people to step back from the chaos of their lives and live in the moment; soak it up, spend it with someone who is important to you, and throw caution to the wind” explains Josh.

Check out the single below and find out more about Josh via our Five Questions With segment.

Yes, for sure! Hey everyone, my name is Josh Norrad. I am from Upper Miramichi, New Brunswick, along the banks of the world-famous Miramichi River. My journey began after I taught myself how to play guitar at the age of 15, however, it was not until I was 19 that I began to sing. After a few years of playing in a rock band, I eventually reconnected with my country roots. In early 2011, I released my first single “Backroads”. I received such an amazing response from my fans that I decided to continue pursuing a career in country music. Since then, I have gone on to release a full-length album, along with a number of singles. I have been nominated for 6 MNB Awards, including two time Country Artist of the Year; and have received nationwide airplay on TV and radio. I have also had the opportunity to perform for one of the biggest music festivals in Canada, Cavendish Beach Music Festival!

I have just released a brand new single called “TO THE WIND”. This song features a flawless performance by Dean Brody’s award-winning band and was produced by multi-award-winning / multi-platinum selling producer Jason Barry. “TO THE WIND” hit the ground running and reached #11 on the iTunes Country Charts a full day before its official release.

I like my music to be either loaded with fist-pumping energy or to be very real, reflective, and soulful. It is very rare that I will write anything in between. I also have a tendency to write for a live audience. You could call some of my songs “anthems”. Catchy and something that the crowd can sing along with even if it’s their first time hearing the song.

Since the COVID-19 situation is ongoing, all live performances are currently canceled until further notice. However, I love performing live and look forward to hitting the stage again soon! It is the time when you get to connect with your fans face to face, not through a poster or a phone/computer screen. I have always been so honored to have people attend my live shows; because in reality, they could be anywhere, but they chose to come and watch me. In my opinion, they deserve the best performance that I can give them. If I was to describe our live performance, I would sum it up as high energy performance, with a focus on crowd involvement.

I would suggest that you check out my latest single “TO THE WIND”. This song talks about two people who are living in the moment, and that is something we tend to not do enough of these days. I hope that this song will inspire people to step back from the chaos of their lives and live in the moment; soak it up, and spend it with someone who is important to you. Let this song be a reminder to you that better days are ahead. My hope is that it will give you a 3-minute escape; along with positivity and hope in this chaotic time.

I follow many Canadian acts, I love watching them work and grow. Some Canadian country acts that I have been following recently are Tim Hicks, Dallas Smith, Dean Brody, Jason Benoit, Tenille Arts, and The Hunter Brothers, to name a few.