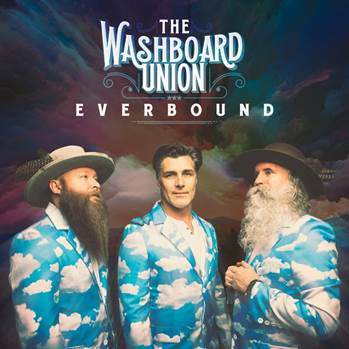 On April 24, The Washboard Union, a trio of three very talented artists who also happen to be Canada’s leading country music band, are releasing their fourth album, Everbound. This one is their third full-length album.

“Everbound is all about chasing what actually fills your heart and makes you feel alive, never losing that sense of wonder that we’re all born with. We’re really proud of this collection of songs and the undercurrent of hope that seems to unite them all. Feels like we could all use a bit of hope right now.”

Also on this same day, these gentlemen will release their latest single, “Dock Rock,” to Canadian country music radio. A double win for all their fans and supporters!

“It is often funny how songs come to be written and then end up being on the album. I recall the beginnings of “Dock Rock” being of very simple origin. We wanted a groovy, swagger type of song, and played around with a Steve Miller Band vibe. Lyrically, sometimes it’s harder to write something simple in an interesting way than to simplify a complicated concept. Since we grew up in Lake Country, we had plenty to draw from experience-wise, so we set out to write a great summer ‘feels’ song. I remember though, multiple times during the write, each of us looking up at one and another and saying, “Are we really doing this?!?’ because sonically, it was such a departure.””

“We wrote ‘Dock Rock’ in the middle of blistering Tennessee heat wave. We couldn’t make it to the water that day so we brought the water to us.”

If you haven’t heard of The Washboard Union (they do have a world-wide following that just keeps on growing and are becoming Canada’s preeminent country band), here’s a bit of their history:

“What started out as three best friends (Aaron Grain, Chris Duncombe and David Roberts) and a love of song writing has grown into the most exciting, recognized and talked about band in country music. Resonating with audiences far and wide from North America to Europe, performing in front of over 200,000 fans last year, The Washboard Union’s dynamic live performances have set them apart as one of the most unique talents in music today. The Gold-certified trio are also the two-year reigning Group of the Year at the CCMA Awards and winners of the JUNO Award for Breakthrough Group of the Year, bringing their career music award total to an incredible 27.”

In 2018, The Washboard Union released their third album, What We’re Made Of, which drove the band to a JUNO Award win for Breakthrough Group of the Year and multiple Canadian Country Music Association Award wins including Group/Duo of the Year and Roots Album of the Year. Everbound is the follow up collection to this immensely successful album.

Back to Everbound – Everbound includes ten tracks, including the studio and acoustic versions of their Top 5 smash country radio hit “County Thunder” and their brand new single “Dock Rock.” All three tracks are available now for those who pre-order/pre-save/pre/add the album.

The Washboard Union will be joining country artists from across Canada and the US for #canadatogether: In Concert, an unprecedented five-night broadcast event showcasing 20 of the biggest names in country music coming together in support of Canada’s COVID-19 relief efforts. Join The Washboard Union, Luke Combs, Brett Kissel, Tenille Townes on Tuesday, April 21 on ET Canada at 7:30 p.m. ET/ 7 p.m. PT.

All proceeds raised will be donated equally between Food Banks Canada and the Unison Benevolent Fund, as these organizations work to support Canadians during the COVID-19 pandemic. In addition, Spotify will help make donations stretch even further by matching every dollar (up to $10million USD globally) provided to the Unison Benevolent Fund through their #SpotifyMusicRelief project. Canadians looking to donate can do so through a one-time or monthly donation option at the Canadian Country Music Association Foundation website, or by texting CCMA to 20222.