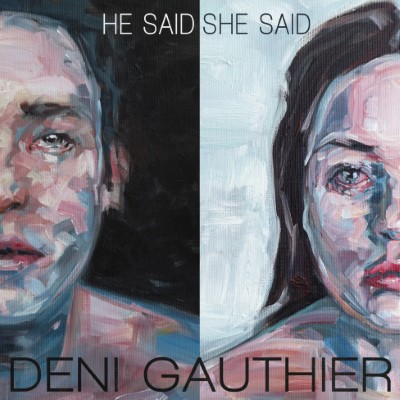 Ladies, gentlemen and otherwise: prepare to feel. Deni Gauthier’s latest album is a dulcet pleasure for the sentimental among us.

As you might imagine based on the title, He Said/She Said’s lyrical focus is on relationships. Like them, these melodies can be sometimes heartening, sometimes sad, and often a conflicting mixture of both. Take, for example, the chorus of single “Next Line” and its wistful acceptance of loss and moving on: “Maybe I’m just here to let you go.” While songs like this tend to look forward, others are more retrospective, the word “remember” surfacing in at least a few. The album explores the past, present, and future of human-to-human connections in all their vast and varied scope.

Providing the emotional depth necessary to such content is the Ontario singer-songwriter’s charming vocal style. Deni Gauthier’s hushed, crooning voice causes every sentiment he touches on to resonate. It makes lines like “The most important thing we ever did was love someone” hit right in the heart. Moreover, it fits in perfectly with whichever dual-direction the music takes. At times, this can be predominantly folk-oriented like the title track opener with its soft synth tones and faintly echoing drums, along with slide guitar that is a frequent feature of several tracks. At others, it delves more into the realm of rock, like the constant distortion and heavy-punching solo of “Slowly Fading.”

That is where the album deviates somewhat from the artist’s past work, which was more wholly characterized by the folk designation. This time, Deni Gauthier retains the easy-going air and narrative bent of that genre, while allowing it to reach new boundaries of dynamism. It makes for an album that is fairly evenly balanced. He Said/She Said is a whole lot of pensive, with just the right amount of piquant.