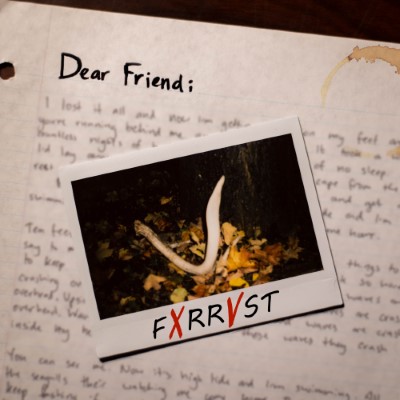 To say that Holly Forrest and Matt Fuentes have chemistry as musical partners would be beyond an understatement. The creative cross-section of sounds and ideas captured by the pair is nothing short of enthralling and this latest outing under their flag of FXRRVST is no exception. Dear Friend; Pt. 1 is the indie rock duo’s latest release – a four-song EP that is absolutely all killer, no filler. Forrest and Fuentes possess a sound that runs at the upbeat and electric pace of Metric or Silversun Pickups-style indie, but with an anxious and vulnerable edge that makes this record feel thoroughly personal and empowering.

The record kicks-off on “Bad Things”, an upbeat,  acoustic guitar-driven track that sets a good benchmark for the sound and themes to come on the album. Opening on a haunting emo-tinged melody, “Bad Things” fights through the darkness until it’s triumphant end as Forrest pleads for help in moving on with her life. Following a similar lyrical theme, “This Rough Patch” takes on a lighter, more hopeful musical tone that works alongside the song’s words that assure a brighter tomorrow as long as we work together today. This theme of mental health and speaking to the love and support needed by those who suffer is clearly a central theme on this record. The way Forrest and Fuentes are able to express the subtle emotional nuances that come with the sorts of feelings they sing about is profound. They show not only the dark and uneasy side of mental health but also the all-to-often glossed-over struggle to uplift yourself and reintroduce the joy and brightness one can hear on “This Rough Patch”. On the other side of things, “Anxiety” manages to express exactly that feeling in a highly effective way on what is the most musically complicated track on the record. The song stops and starts, screams and whispers, and just generally lives up to its name to a jarring degree, especially in hearing Forrest make the most honest admission, “I’m not alright.” The record closes on “Dark Glow” which features just Forrest and a guitar urging us to breathe as things mellow back down into a sincerely hopeful and empowering space of serenity.

Perhaps what is most compelling about Dear Friend; Pt. 1 is its maturity. Maturity in the sense that many musicians attempt to tackle themes of mental health with an air of blind optimism and impatient and unrealistic idealism that FXRRVST aren’t attempting to push on this album. They acknowledge the struggle it takes to get better and they take the listener along for that ride, showing them in both words and sounds. There is no cheap tear-jerking or anthemic trivializations of mental health. Just pure heart and honesty. This is the sort of EP that hits you so hard and so fast that before you even realize it’s over, you’re already queuing it up to listen again.