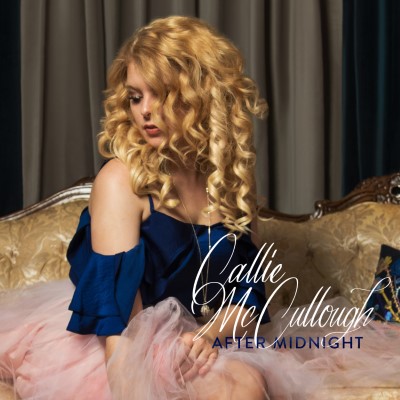 After Midnight is the first solo album from Ontario born, Nashville based artist, Callie McCullough.

After Midnight is overall a warm album that is instantly inviting to its listeners. At the first word, the full breadth of Callie’s husky, yet soft, vocals wrap around your ears like a thick wool sweater: and yet, though her vocals are certainly put forefront on the album, there’s a distinct vulnerability in Callie’s voice. Her vocals sound hushed, as if they were performed by whispering into the mic — this only builds on the aforementioned intimacy, as if only we, the listeners, were deemed trustworthy enough to hear Callie’s deepest and most confidential feelings. This makes sense as each song of After Midnight seems to come from a place of very personal experience to the artist.

Every song on After Midnight is about an overarching theme of love, but each focuses on a different aspect. Tracks range from being madly in love to walking proudly away from a failed love, to unrequited love due to social status, to missing a lover, to having to break a heart, to the love of 3 quarter time and Patsy Cline. To cover these varied aspects of love, Callie uses a similarly varied accompaniment of classic country instruments such as dobro, fiddle, mandolin, banjo, acoustic guitar, electric guitar, lap steel, electric bass, piano, and drums. The accompaniment has such a smooth and easygoing flow from track to track, it’s easy to believe that this is a talented band that has worked together for many years.

Standouts on the album for me were the tracks “Feathers” and “3 Quarter Time”. “Feathers” starts fiercely with the drumbeat of a runaway train, followed by a lively and dramatic accompaniment. This makes sense as the song describes how dangerous bad lover “one by one..pulled [her feathers] out,” making Callie’s last escape fail and come crawling home — but she hasn’t given up and as soon as her feathers grow back, she knows she’ll get far away this time.

“3 Quarter Time” is a great meta-commentary on Callie’s career as she bemoans no one likes “sad songs in 3 Quarter Time” sadly, and in 3 Quarter Time. Callie asserts, though, that there is just no other way she can perform as her love of old country artists like Patsy Cline is all-consuming — so she’s resigned herself to being paid in whiskey, but not making a dime.  The accompaniment seems similarly heartbroken as even the violin weeps with Callie that their style of music is no longer wanted in the face of “new country.”