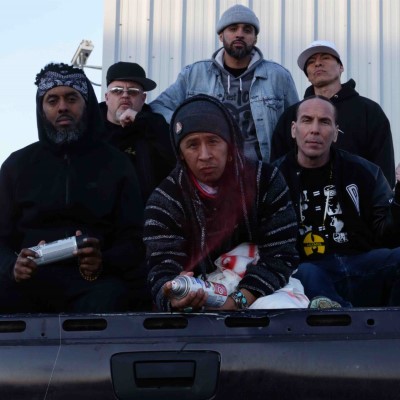 After the launch of his powerful new single, Turtle Island, legendary Grammy, and JUNO Award-winning Indigenous multidisciplinary artist and producer, David Strickland, has just unveiled the new video for the track. Directed by Daniel Fortin of  Little Bear Big Wolf Pictures, and filmed at Six Nations Of The Grand River in Oshweken, Ontario, Turtle Island arrives during a period of uncertainty in the world, yet, the song’s messages translate beyond borders, with potent, timely themes.

“It was an honour to be part of this project. The timing of this song is so important, and I’m blessed to be part of David’s message,” says director, Daniel Fortin. “I am grateful and have nothing but love for such a hard working crew, dancers, drummers and of course the incredible group of artists I was able to spend some time with.”

Turtle Island was released on David’s daughter’s seventh birthday on a rare numerical occasion (2/20/2020). On the date, David comments,

“I chose this date in her honour, it contains four 2s in it, which signifies strength, resolve, indicates empowered commitments, emotional stability and the fulfillment of sacred contracts. That significance rings true on the journey I took creating this song and album. Full Circle.”

David is passionate about the plight of the Mi’kmaq people and recognition of his family lineage can be traced back by five generations. He is committed to restoring the dignity and respect striped by an unconstitutional agreement that remove and denied Indian status from thousands of people.

“Turtle Island” is from David Strickland’s forthcoming album, Spirit Of Hip Hop, which is set for release on June 29 via Entertainment One, and is a community-driven track that features Supaman, Artson, Spade, JRDN, and Whitey Don. David calls the song “a state of the union” and commentary on life in 2020 on Turtle Island (a name many Indigenous People use referring to North America) for Indigenous, Afro-Indigenous, and Africans, either stolen or of the diaspora. It comments on the increasing divide between the rich and the poor, and the injustices towards Indigenous people that continue to be hidden in plain sight, while they are marginalized.  Turtle Island combines David’s musical influences, including traditional, dancehall & hip hop giving it a uniquely rich sound.