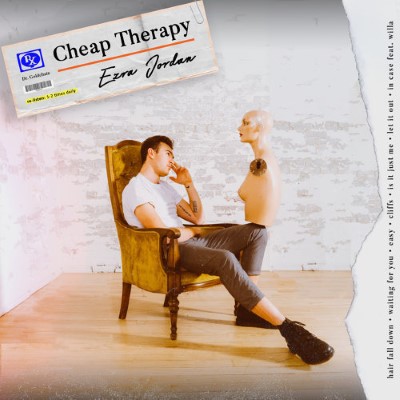 The prospect of setting yourself apart in the world of pop music is a daunting suggestion. Artists like Taylor Swift, Beyonce, Adam Levine, and Harry Styles, love them or hate them, are household names. They have certain aesthetics and public images that are carefully cultivated and refined continually throughout their careers in order to maintain a brand that both conforms to ever-changing cultural values, while still remaining somewhat faithful to their base public persona. But this is something that takes time to develop. A pitfall that up-and-coming pop artists often find themselves falling into is the inability to find their place in this spectrum of pop music personalities. This debut EP from Toronto’s Ezra Jordan is by no means a bad record musically speaking. But at the same time, there isn’t much here that clearly screams “this is Ezra Jordan. This is his thing. This is what he’s about.” Cheap Therapy is a well-performed and well-produced record. But it’s also a very safe record.

Save for some individual moments that might catch your attention, there isn’t a whole lot here that you haven’t heard before. The record opens on “Hair Fall Down”, a catchy song about love with some interesting delayed electronics layering the background. The vocals are solid and the music works well. “Waiting For You” is among the more memorable tracks on the record with it’s funky, pulsing bassline and smooth vocal flow. “Easy” feels the most authentic with it’s steady beat and very singable chorus that lend themselves well to Jordan’s voice and the smooth and gentle tone that he conveys. Unfortunately, the lack of any real hooks or attention-grabbing moments causes this song to quickly fade back into uniformity with the rest of the record. The three songs that follow are more-or-less just variations on each other. “Cliffs”, “Is It Just Me”, and “Let It Out” are no doubt catchy songs that each have a slightly different appeal, but the common factor is how unchallenging and unprovocative they all are. All three attempt to take on a bouncier, sexier and more R&B-influenced approach than other songs on the record, and yet they fall short of actually being able to genuinely evoke those ideas and feelings in the listener. The track closest to what could be considered the big club banger of the record is the closer, “In Case” featuring Willa. This song has catchy and memorable choruses, the addition of a female voice from Willa gives some depth to the overall palate, and the hooks and built-up climax hit hard.

There is no question that Ezra Jordan has some good ideas and can put together solid songs. The issue is that you couldn’t point to any of them and assert, “This is what Ezra Jordan sounds like. This is his trademark.” Hopefully, that will come with time. We can only wait and see.