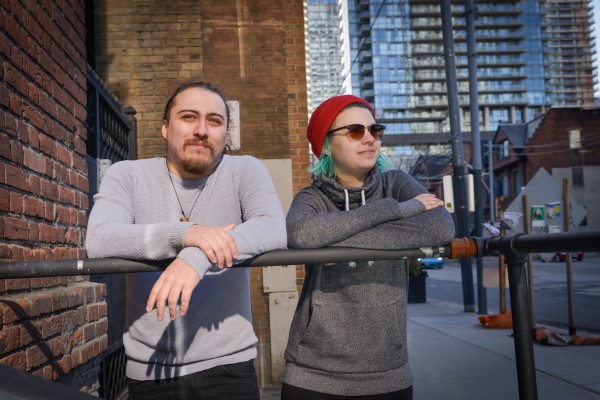 International indie duo FXRRVST have released their new EP, Dear Friend; (Side A).

The four-track record sees the Canadian/Australian pair tackling some personal and introspective subject matter in this follow-up to their 2017 full-length, May XXVI.

Canadian Beats had the chance to ask the pair a few questions about how their new record came together.

You’ve said that this EP came together in a much more intentional way than on your last record, given that you knew you were going in to write an album, as opposed to a collection of songs written up to that point. What guided your process in writing a cohesive, self-contained EP? Is there an overarching message or theme that motivates the whole record?

The actual songwriting process has stayed the same. For the most part, I (Holly) write the lyrics and basic chords, bring it to Matt who then changes some of the chords and/or the arrangements and adds all the other musical elements. There is definitely an overarching message/theme for the two EP’s and that’s mental health. Each song is a different perspective, for example, songs like “Bad Things” and “This Rough Patch” are about overcoming difficulties and are much more hopeful in general whereas songs like “Anxiety” are from a place of hopelessness and the darker side depression/mental health.

You mention that on the new EP, some of the writing takes place from the position of not necessarily where you are, but where you want to be in life. What is the motivation behind taking this approach when writing about subject matter like mental health?

I think something that separates us from a lot of other artists is how undeliberate our writing is.  We don’t really write systematically or with motive.  It is very much a tool that we use to help cope with our mental health, which we’ve just gotten comfortable enough to share with others in hopes that they will feel something from it and find a bit of reassurance that they are not alone.  That being said, life is full of ups and downs.  Sometimes we feel like anything is possible and sometimes, you run into a string of bad luck.  We just write about how we feel, and wanting to feel a certain way is still a feeling….if you know what we mean haha.  Hard to explain, but I guess the short answer is just, we write what we feel.

What initially led to you (Holly) wanting to pursue a music career in Canada?

I’d been using music and writing as an outlet since I was 9. I never really saw it as a career until it was time to go to university. I was originally going to study environmental science in the UK. My dad sat down with me one day and asked me if that’s what I really wanted to do right now. He knew how much I loved music and how much it helped me, so I ended up moving to Mississauga to study audio engineering.

Australia has a music scene that appears like it would share a fair amount of similarities to what we have here in Canada (geography, colonial history, western/American influences, etc.). Could you speak to some of the similarities and differences between working as a musician here in Canada versus back in Australia?

Unfortunately, I only lived in Australia until I was 7 so I can’t speak too much about that.

How did the two of you end up first meeting in Toronto? How did the idea to partner up come about?

We met on Holly’s 1st proper day in Canada through a mutual friend. Our mutual friend knew we were both pursuing music and suggested we write together. We laughed at the idea because both of us had very particular writing styles and had very different taste’s in music. We were instantly best friends though so we kept giving it a go and eventually it worked out!

You plan on releasing download cards with flower seeds instead of physical CD copies of your upcoming EP, for the sake of environmental sustainability. Going forward, how else do you hope to be able to incorporate sustainable practices in presenting your art?

We were very excited to share these EP download cards with everyone, however, due to the COVID-19 outbreak, we’ve put a hold on manufacturing anything, which in hindsight is the most eco-friendly option out there.  However, we’ve been exploring ways to limit manufacturing as much as possible and have come up with a few ideas.  With the recent decline in CD usage, we’ve unfortunately decided not to print CDs anymore.  With all our music, we will only be printing vinyl and download cards.  We have a lot of merch ideas as well that we cannot wait to share with everyone, but that will have to be kept a secret for the time being.

Should we be expecting a Side B at some point in the future?

What music are the two of you listening to these days?

So many artists are releasing new music now, which has been a great gift given the times.  We’ve both been discovering a lot of new music through our Spotify “Daily Mix”. At the moment we’re loving the new stuff by Hayley Williams, Jess Day, Beabadoobie, Iliza and the Delusionals, Suburban, the Weathers, the list goes on and on.