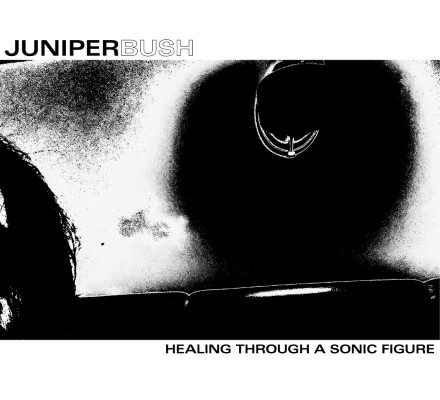 A complaint to be made about a certain percentage of modern indie rock is its conservatism. The absence of many big risks and the unwillingness to assert new tones and emotions into the music in favour of maintaining a consistent atmosphere or aesthetic is often something that causes many good albums to remain only that. Just good. This debut record from Winnipeg’s Juniper Bush couldn’t be further from that idea. Healing Through a Sonic Figure is a modern indie-rock record that isn’t afraid to expose it’s darker, more aggressive tones while still maintaining a solid foundation in psychedelic/shoegaze roots that allow it to explore a more complex range of sounds and emotions than many of Juniper Bush’s peers in the genre.

The opening track, “Hindsight”, washes over the listener and introduces them to the hazy space of ripping clean guitars and the hypnotic, wailing vocals of singer/guitarist Lizzy Burt that is where the record finds it’s initial grounding. But what makes the tone of this record so compelling is the tension between this ethereal, psychedelic bubble that opens the record and the fuzzy, hard-hitting riffs that kick off the following track and lead single, “Foresight”. Where the shimmering clean chords of the opener attempt to lift the music into something spacier, the powerful, aggressive riffs in “Foresight” pull things back into the ground in a very engaging and danceable way. As well, Burt’s soaring belt-out around the 3:21 mark of the track is undoubtedly goosebump-inducing. “Who Are You” doubles down on the riffs and pulls out some infectious shoegazing slams as the record introduces the voice of bassist Danny Hacking to the palate for the first time. Much of the record continues on this theme of the push and pull between the light and spacey and the dark and stomping. “Turn” and “Slowly”, for example, serve as two sides to the same coin where the former creates a haze that the latter trudges its way through from the moment the first track seamlessly flows to the next.

It is Juniper Bush’s ability to ebb and flow between aggression and serenity that makes this record so engaging. What’s more, this is done in a way that feels undeniably authentic and cohesive as a full-length, self-contained piece of work. Healing Through a Sonic Figure touches on a variety of different musical elements and tones while still presenting a compelling and unified indie rock record that takes risks that the band has no trouble pulling a reward out of.