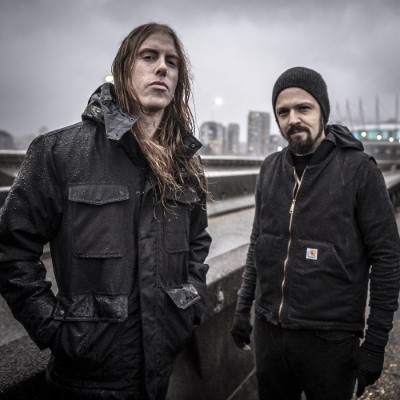 Ritual Dictates is a supergroup of seasoned musicians that have taken parts of their previous experiences to create a new venture. I had the chance to chat with Ritual Dictates to discuss their debut album Give In To Despair, which was released on April 3, 2020. Check out the interview to hear about the album inspiration, lessons of being a band, and future plans.

Let’s start by talking about your debut album, Give In To Despair! Tell me a bit about the album.

We’re very excited that our efforts are finally coming to fruition. This record has been about 6 years in the making and Justin and I are very happy for its release. We are happy to be working with ArtOfFact records on this release and super happy to have some great musical guests on this record including Shane Clark and Danko Jones.

This album was inspired by a few of your past bands, how have those experiences influenced this musical adventure? Musical style or otherwise?

It’s all really a continuation of mine and Justin’s musical relationship from 3 Inches of Blood and the music we’ve been inspired by. The chemistry was already well established. So we were naturally able to take all the stuff we’re both into and put it into a musical stream.

Ritual Dictates was featured on the ‘Death Metal & Beyond’ playlist on Spotify! How has that helped the build-up to your new album?

It’s pretty cool to see the responses we’ve been getting and seeing the number of listeners we’ve been attracting. It’s also, allowed us to ’take the temperature’ of the current musical climate and see how people would respond to and welcome a band of our style. I imagine there’s some built-in loyalty from our 3 Inches of Blood listeners who’ve been curious about the things all of us have been up since the band’s disbandment. We are very appreciative of that as well.

Why did you choose ‘Given To Despair’ as the first single?

We felt it was our best foot forward in that it’s a good representation of the different elements of our sound. Straight ahead brutality with stylistic detours that (to us) make sense for the song.

What’s the biggest lesson you’ve learned over the years in other bands?

Probably how to establish a vibe for the project at hand and how to work together with compromise. Also, how to pull from our various influences and take things that are not metal in origin and put them naturally into a metal song.  I can’t think of any times that any of this felt difficult musically speaking.

What else do you have in store for 2020, once everything is safe again?

To debut all this stuff in a live setting. We had some gigs booked in April that we’ve needed to reschedule. So that will be the next step for us once the album is released. Playing some fests would be great too. I haven’t traveled with Hagberg in years so that would be AWESOME.

Even in the face of a global pandemic, I’m delighted to see the human spirit still determined to enjoy life and allow for artists and bands to put out new stuff regardless of the trouble we all encounter. Stay Strong, we love you all.