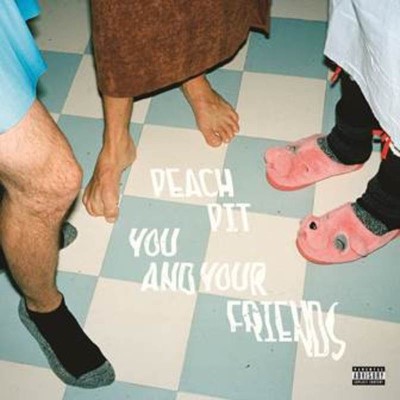 Vancouver indie-pop favourites Peach Pit have released their latest album You and Your Friends, a 12-track collection of dreamy thoughts and stories and instantly likable melodies.

Peach Pit is made up of Peter Wilton, Chris Vanderkooy, Mikey Pascuzzi, and Neil Smith. The band began garnering attention in 2016 when they released their debut EP “Sweet F.A.” Known for their lazy summer vibes and Mac Demarco-esque songwriting, their latest release is a collection of true stories – some more exaggerated than others according to a statement from Neith Smith.

Opening with the angsty, guitar-heavy “Feeling Low (Fkboy Blues)” the album’s energy is consistent throughout, even when the instruments mellow out. Introspective and retrospective play their respective roles on each track. One of the first songs to be released before the full album, “Black Licorice”, follows the relatable fears and notions of being left behind by your friends, being seen as a burden. Then you have “Shampoo Bottles”, a tale of that relationship you can’t seem to let go of, where you find yourself keeping their things around the house even when they’re long gone. You’ll find that “Puppy Grin” is a full-on dance party and the final number, the title track, is an easy, mellow melody centering around a group of friends that seem to think everyone else is a villain except them. It’s a real indie-pop force, and we’re lucky to be along for the ride.

In a time of anxious thoughts and uncertainty, an album like You and Your Friends could be exactly what you need to put a certain ease to your mind and body. The wistfulness that surrounds Peach Pit’s aesthetic is like an escape from our current realities. Transport yourself into their psyche and immerse in their music. I promise you, you won’t be disappointed.