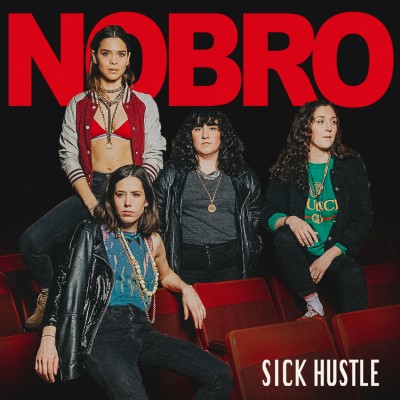 NOBRO is a four-piece Montreal punk rock band that you need to take note of. With a few singles already under their belt, the band is back with their EP release, Sick Hustle. This record is a fast-moving and hard-hitting collection of four angry and anthemic punk rock songs that will stick with you long after listening.

The album opens on “Don’t Die”, a reckless, stomping singalong track that issues but one request to its listener. The song bounces along to a simple beat as the distorted guitars scream along with the vocals while an unexpected and subtle bongo solo underscores the chaos and contributes the first taste of the trademark whimsy that presents itself on much of NOBRO’s music. “Till I Get It All” is a nihilistic ripper of a song that picks up the pace of the record and shows off the bands more than impressive punk rock chops. This track exemplifies the struggle that many all-female bands like NOBRO go through to assert themselves as leading voices in the scene, as singer Kathryn McCaughey sings “I will try and try, ‘til I get it all.” “Don’t Wanna Talk About It” is “as close to a love song as we’re going to get,” according to McCaughey. This is another mid-tempo stomper of a track that features a really cool psychedelic breakdown section near the end that further shows off the wacky, somewhat erratic aspects of NOBRO’s sound. The closing track, “Marianna”,  is an upbeat anthem in a similar vein to Rancid, that plays with some interesting synth sounds at times and features some of the most impressive drumming on the album from Sarah Dion.

For an EP of only four short songs, NOBRO’s EP Sick Hustle is a hard-hitting and very memorable record. Every song executes an impressive balance between righteous anger and nihilistic whimsy that defines a lot of what makes NOBRO unique. They know where a band like their’s stands in the wider punk rock scene, but aren’t willing to settle for fitting into their place. NOBRO are carving out new ground in the world of punk rock with Sick Hustle.