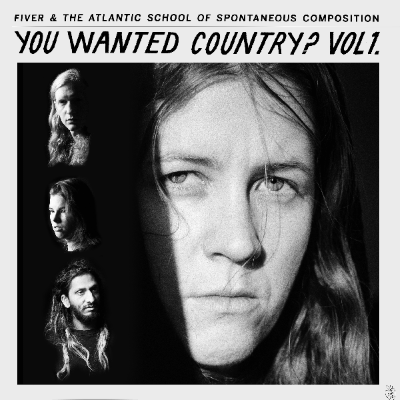 Simone Schmidt, perhaps better known by her solo moniker, Fiver, has put together the first of what is planned to be a series of EP releases, featuring a mix of original songs and covers of some legendary country tracks. You Wanted Country? Vol. 1 is a six-song collaboration between the acclaimed frontperson of Toronto-based country band, One Hundred Dollars, and her new backing band, The Atlantic School of Spontaneous Composition. This exciting new release from one of Canadian country’s leading voices features covers of long-standing icons from the genre, including Gene Clark, Johnny Paycheck, and Willie Nelson.

Schmidt opens the record with an original new song called “It Is What It Is”. This psychedelic-inspired track draws the listener in with Schmidt’s soft, twangy voice in harmony with bassist Jeremy Costello and wraps them both up in a blanket of bending and warping slide guitar riffs. This fluid, trippy sort of tone persists through into the covers as well, as the record moves on into “Train Leaves Here This Morning”, originally written by Doug Dillard and Gene Clark in 1968. The Fiver-ized version of the classic tune sends things into a bit of a haze, again filling the space with slide guitars and lap steels aplenty and drawing the song out just a little bit longer, in true psychedelic form. Following that is the group’s rendition of Johnny Paycheck’s hit, “It Won’t Be Long (And I’ll Be Hating You)”. This track shakes things up as it features Costello taking over the lead vocals, while Schmidt backs him up. Again, remaining faithful to the original, while still incorporating enough uniqueness and personality in the tone and delivery makes this an effective reimagining of a classic country song. Same goes for their cover of the emotional Willie Nelson ballad, “Why Do I Have To Choose”. Fiver’s back and forth vocals with Costello approach this typically stripped-down song from an intriguing, yet subtle new angle. The record closes on an extended version of  “It Is What It Is”, packed with even more psychedelic guitar noodling than before. The record also includes a seven-minute-long bonus jam track, featuring another Simone Schmidt side project, The Highest Order. A fun tune to cap off the record to, “Show Me The Mark” lands somewhere in the realm of a countrified Grateful Dead jam.

Overall, this first release of many is definitely a solid one. It expertly balances authenticity to the original work, while also putting just enough of a personal spin on it to make it worthwhile. As well, Schmidt’s original track fits quite well with the other selections.  You Wanted Country? Vol. 1 is a great kick-off to what should be an exciting series of releases.