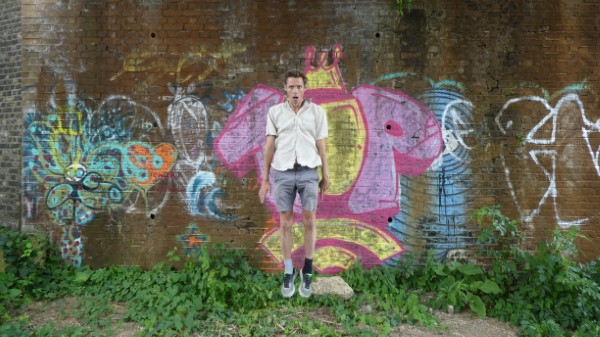 Halifax, NS-based folk and dance-pop artist, Jont has released a video for “I Think It Could Be Possible”, which is the first single from his forthcoming- and eleventh album, Thank You For The Medicine. He is encouraging that “all of us together can change the way the world works.”

And so goes the call to action in his new single, “I Think It Could Be Possible” — and resulting cover song invitation.

“So many people seem to think things are so bad right now, and are giving up hope that we can have any positive impact on our world,” he says. “I say, don’t get swept away by disempowering goals of changing the collective chaos caused by humanity.

Instead,” he continues, “affect positive change on the world around you right now by changing how you relate to the world… By addressing the inequality you see every day around you… By healing the wounded parts of you that stop you from being as loving and kind as happy as you would like to be…

If everyone did that, imagine what our world would be like.”

One way the Halifax, Nova Scotia-based singer/songwriter hopes to accomplish this is by inviting those around the world to download “I Think It Could Be Possible” (gratis!) and submit a video of their version covering it via https://jontnet.com/i-think-it-could-be-possible

“I’m excited to see takes on this song from around the world,” he says. “This is a fun and surprisingly effective way to bring positivity into a trying time. I can’t wait to see them… All of the videos are beautiful.”

Check out the single below and find out more about Jont via our Five Questions With segment.

Sure. My name is Jont and I am originally from the UK but moved to Halifax, Nova Scotia almost exactly 8 years ago to live near my daughter.

Music, or more accurately – realising my creative, poetic vision, communicating my profound gratitude for being alive and expressing the joys and pains of this existence through songs and organising gatherings which suit the singing of these songs – that has been what my life has been about

since I was 14 and I first started writing poetry. I have been fortunate enough also in these years living in Halifax to work part-time as an assistant to a quadriplegic author and disability advocate called Jen Powley. The combination of service and creativity has been productive. I have a new album that is of a genre I call “Medicine Pop” because of its healing, radiant energy, but it isn’t like traditional pop – it has electronic dancey backing tracks, but also acoustic guitar, piano, a choir and a string quartet.

Transparency and honesty are at the heart of it. I will definitely stop playing a song halfway through if I’m not genuinely there and feeling it. I have been doing the work for the last 25 years, looking into the deepest darkest crevices of my soul, facing up to all the aspects of my shadow, and addressing addictions and bit by bit attempting to transform. The songs I have written are the echoes of that journey. Sometimes they are just me and a nylon string guitar. Sometimes I’m jumping around with the electronic beats and the choir and these luscious colours swirling around our hearts. The message is the same. Peace. There is peace deep within. Peace. LOVE. Is behind the whole shebang. The mind obscures. The ego obscures. Get it out the way. Let the love flow through. It’s always been the same. Who of any worth sung of anything else really when it gets down to it?

Well, yes I do actually. I’ve been playing regular shows on my Jont Facebook page. Doing regular Zoom hangout with fellow songwriter friends which I then cast to FB. There is often something going on there, especially right now more than ever. I enjoy the intimacy that can be created when you are streaming from your bedroom or kitchen…you never have to feel for a moment that anyone is going to be watching unless they really want to be watching. Isn’t that such a freedom? I love it. There might be 100 people watching, 20, 4….whatever….does it matter? Isn’t this time teaching us, as we sit in our pods with often just ourselves for company (I’m on day 9 of my quarantine as I write this!) that it is us and our connection with the songs that is important. Authentically connect to the spirit that was there when the song was born. Allow the song to come alive and then simply allow it to come through you. And who cares who’s watching? You will be alive in that moment.

The song that is blowing my mind at the moment IS the song we are releasing, “I Think It Could Be Possible”. The universe told me to write it, said you have a song you’ve just recorded but you need to change the words and re-record the vocal and then find a choir who really believe in the song to re-sing the choir part and you need to get this out to the world to help uplift people and bring people together. That was the message I got last Fall. And so I did it and I’ve got the song ready to release and we were all ready to release the song on March 31st and then the virus happened and – the world changed – and everything I was saying in the song suddenly became 100 times more pertinent. I mean, it is literally the anthem for this time. This beautiful, listener-led project has started called The “Possible” challenge – people are doing their own versions of the song and sending them into me, and sharing them on social media. We are getting loads of versions of the song in, from different people all around the world who feel connected to the message of the song, who feel that the song speaks for them…. so that’s the song I would check out. It’s more important than any of the other ones I have written.

My favourite Canadian musicians are those that I have met since moving here. Not sure whether you will find it easy to find the work of Callum Isaac but he is a local genius (https://soundcloud.com/callumisaac), as was the better known Cud Eastbound before he moved to Yukon City, and then, of course, there is extraordinary Jacques Mindreau. There are others of course, but those are the first three that come to mind.