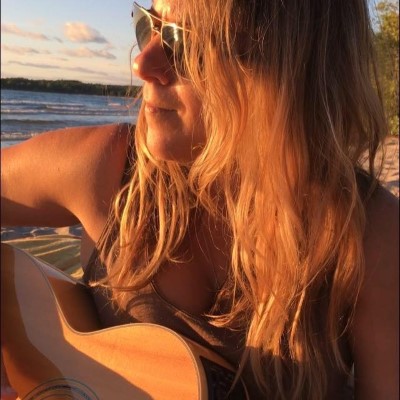 Canadian folk singer-songwriter Raina Krangle has released a new single, “My Beautiful Dear”. The track was recently selected as a finalist in the 2020 Blues & Roots Radio’s International Song Contest and is the premiere single off her forthcoming album, Headbangers – A Musical Recovery From Mild Traumatic Brain Injury.

On the surface, Krangle’s inspiration for “My Beautiful Dear” is endearing in itself; the storytelling lyricist draws on her parent’s 54-year long love story and her childhood in a house where Bruce Cockburn’s “All the Diamonds” was the harmonized lullaby of choice.

But to understand why “My Beautiful Dream” is even more poignant to Krangle, it’s to know it stems from her recovery from a traumatic brain injury (TBI) just under a year ago.

“The injury happened while I was at work as an educator,” she says of the accident. “From there, my road to recovery included lots of yoga, nature walks, photography, meditation, and journaling.

It also included my own music therapy, as well as experiencing first hand how important music was for my brain to heal,” she continues. “I immersed myself in studying brain health having learned from a previous educator workshop at Toronto’s Royal Conservatory of Music how music could affect the neuroplasticity of the brain.

The act of completely slowing down opened the window to self-reflection, vivid dreams and a vast amount of creative flow.”

Check out the video for “My Beautiful Dear” below and find out more about Raina via our Five Questions With segment.

Tell us about your music & writing style.

My music started out mostly folk with a guitar & some harmonica to accompany me because I just wanted to sing but later I started writing my own songs & it evolved into folk/rock, CSNY inspired harmonies with a twist of country. Must’ve been because my parents took me to see Dolly Parton &  Kenny Rogers at the Ex when I was a little kid! I’ve been told it’s a mix of Sheryl Crow, Susan Tedechi & Stevie Nicks- Americana kinda vibe. My writing is raw, poignant and to the point with positive, messages learned from life, love & work experiences. I’ve been told they’re catchy, simple melodies that people wake up singing the next day. Themes come from observing others’ experiences or from simply reading an article on Bob Dylans’ re-release of “The Basement Tapes,” inspiring my song about the music business, called,  “The Living Room Takes” because for me that’s where I write most of my songs. Another time, I heard  a name on 102.1 The Edge, but missed the story so researched further to find out who he was and ended up writing, “The Story of D.B Cooper.”

Well, I had a live mini birthday party show on my Facebook music page last week!🤣 Unfortunately,  with this virus going around it looks like shows will be online for a bit longer. I was set to play at Open Roof Festival with my band, “Raina & The Wranglers” and at the new Relish Bar & Grill,  but had to cancel after my concussion last April, as I was having trouble with light & noise. My tolerance for that has improved but I’ll likely be going back to my roots a bit longer before I start up with a full 5 piece band again.  Shorter singer-songwriter showcases, duo or trio shows for house concerts & festivals are perfect for me right now. I’ll also likely be experimenting with some of these online platforms for delivering concerts. They’re actually perfect for somebody in concussion recovery!

How would you explain your live performance?

I used to have terrible stage fright when I first started performing and sharing new songs as a teenager at the iconic folk club, “Free Times Cafe.” Now I feel more confident and natural which I think comes through in my performances, creating a warm heart and soul experience for my audience that’s relatable, inspiring, humorous, comforting and interactive.

If you were asked to suggest one of your songs to hear which would it be?

Wow, that’s a tough question! That’s like asking which one of your kids you like better.🤣LOL, Well my new single, “My Beautiful Dear” is, of course, my most precious new “baby” and so personal and dear to my heart, so that one of course! It’s a real quintessential ballad of love through the decades and tells my parents love story 53 years -minus the ending. However, my songs have slightly different styles,  so I’d have to say that, “Passing Me By” is probably the clearest representation of my folk/rock signature style with soulful vocals and full of harmonies. Yet, “Needle in The Hay” has the funky upbeat tempo and bass that Will get you up dancing. It’s the first song on my last album, “Raina Krangle-Solstice” and it’s the one that was nominated for the Colleen Peterson.

Songwriting Award by Folk Music Ontario & The Ontario Arts Council. So sorry-hard to pin it down to ONE but “3 out of 1 ain’t bad.”  I have over 100 to choose from with so many new ones I play live but not officially recorded yet.

Who are your current favourite Canadian bands/artists?

I love soo many Canadian artists! We really have such unbelievable talent in this country!  I was blessed to see Bruce Cockburn’s last sold-out show at the Royal Conservatory of Music and hear him play “All the Diamonds” live, which is a melody line I sing in “My Beautiful Dear.” I grew up listening to my parents singing Bruce’s songs, Gordon Lightfoot, Joni Mitchell & Neil Young. Nowadays, I love catching a Colin Linden, Tom Wilson or Blackie & The Rodeo Kings show. Locally Paul Reddick never disappoints.  There are so many incredible local talents.