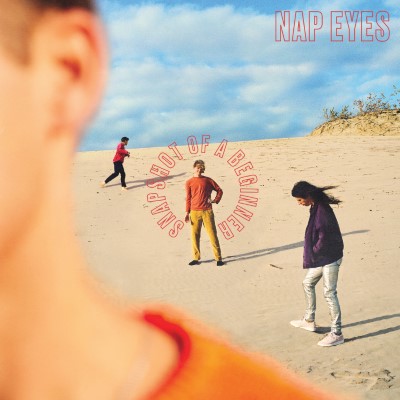 Snapshot of a Beginner is the newest album from Halifax based band, Nap Eyes.

Overall, Snapshot of a Beginner flows well track to track like a lazy stream — this is interesting as the components of the album are quite the collection of seemingly dissimilar elements. The skilled instrumental accompaniment of guitar, bass, drums, synths, and piano has an upbeat and dreamy feel. You get the feeling that this is a group of musicians that have jammed together a long time to create a refined sound. The instruments make an alluring contrast to the male vocals that have a rough, melancholy quality that put me in the mind of early Velvet Underground. These vocals are used to great effect to the album’s lyrics which are bursting with words that are much more interested in free-form poetic expression rather than cutting a thought short to meet a melody. The lyrics are quite vast in theme as well, from universal themes of loneliness, expectations, and change, to thoughts on Mark Zuckerberg and the Legend of Zelda. The culmination of all these rich elements creates a fun relaxed intimacy for the listener — as if we’re sitting in Nap Eye’s bedroom, hearing the lead vocals sing their journal as their thoughts occur, but set to music.

Standout tracks for me were “Fool Thinking Ways” and “Thought I Wish I Could.” The track “Fool Thinking Ways” uses a simple picked string chord as its base, with an underlay of downbeat swimming base of guitars and drums. The simplicity of the chord picking matches well with the lyrics of the singer feeling foolish in contrast to their compassionate friend or lover who “listens to [them] even though [they] ramble.”

The track “Thought I Wish I Could” almost has a summer beach energy in its melody with this fun psychedelic reverb that jumps in and out of the track. This creates a humorous contrast to its self-serious lyrics about feelings of lack of authenticity in the face of experience. As the lyrics say, “Now that I have seen myself for the loser that I am, I cannot go back to change to be cool again.” What I took from this contrast is that even though the singer has these thoughts, we shouldn’t take them too seriously as life can still be fun and worth dancing to.