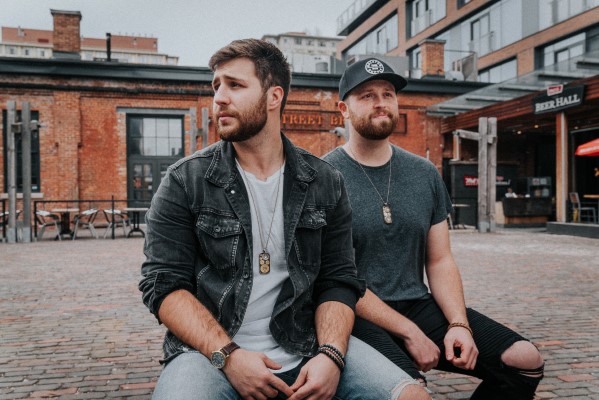 CMAO-nominated Canadian country duo, Buck Twenty, are back from their four-year absence with a brand new single.

The pair of Mike Ure and Aidan Johnson-Bujold have been gearing up for the release of their first single since 2016, “All I Can Do” which was released yesterday.

Canadian Beats got the chance to talk to Buck Twenty about what they’ve been up to for the past four years.

It’s been four years since the release of your last single. What’s been going on with Buck Twenty since then?

Well, we have been very busy putting together our new EP. And we are so excited for the fans to hear some new music.  It’s been a long time coming but Aidan and I wanted to take our time to make sure we put out the best songs we could. We’ve been busy playing shows all across Ontario and have had some pretty incredible opening slots. Between writing and touring we have both been very busy!

Any big plans this year to mark Buck Twenty’s return?

We will definitely be doing an EP release (date to be determined) and will be back on the road this summer all across Ontario and a few other provinces to promote our new music. Were just excited to get out there and play our new songs for the fans. Our favourite part about music is playing live and getting to meet our fans who make this all possible.

Is there anything about coming out of Harrow, Ontario that you think has played a role in your career(s)?

I think coming from Harrow and LaSalle has played a huge role in our career. They are both small towns but have the most loyal and dedicated fans and they have been there since day one. These communities have shown us so much support and have really taken us under their wing. We feel proud to represent Harrow and all of Windsor-Essex.

Inspiration can come from anywhere when creating art. Some look to cultural mediums like film, television, and literature to fuel their creativity. Others find it in nature, in a community, or even in isolation. Where do you look when you are seeking inspiration?

I think we find our inspiration from within ourselves. From experiences past and present that we are going through. Getting to pick up a guitar and write these emotions to music is like therapy for us. From the good and bad, to heartbreak and love; it all comes from experiences we’ve had and that have made us who we are today.

Mike: I would have to choose Keith Urban. Growing up he was one of my biggest inspirations for getting into country music. When “Days Go By” came out I remember listening to the radio and thinking to myself, I want to learn how to play guitar. That song changed my life. So to have Keith Urban play one of my songs or for me to record a song he wrote would bring it full circle for me.

There are so many to choose from! We have played some incredible shows in Canada. I think being apart of the CCMA Songwriter Series in Saskatoon a couple of years ago was such an incredible moment for us as writers. And to be put on a stage with other writers we look up to was incredible. One of our favourite shows and venues was getting to open for Brett Kissel at the Machine Shop in Sault St. Marie! The venue was beautiful, the fans were ready for a party. And the food… best burger we’ve had on the road! We also just had the opportunity to open for Justin Moore and the Colosseum in our home town. That was a venue we have always dreamed of being on.

We have been listening to Hardy and Morgan Walen on repeat! We love both of these guys writing and can’t wait to see them step into the spotlight some more.