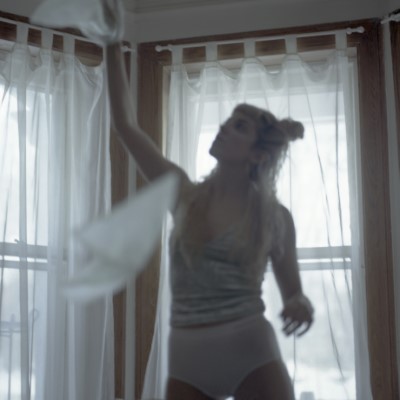 Ada Lea, “the project of Montreal-based artist and musician Alexandra Levy,” is back with her latest EP, woman, here via Next Door Records. The March 27th release follows her acclaimed 2019 debut album, what we say in private, which received notable praise. This EP “acts as a bridge between what’s come before and where she means to go next.” It is a mix of the old and the new.

According to Ava Lea, the EPs title track, ‘woman, here’, was recorded in a day and a half with Marshall Vore (Phoebe Bridgers, Better Oblivion Community Center). “The writing and recording of this song happened like magic.”  In what is said to possibly be her “most direct work to-date, the new song offers a beautiful glimpse into the bold new chapter of Ada Lea.” The track has a creative, attention-seeking melody. This dream-like melody offers a relaxing feel, with the tune changing towards the end to leave an almost unsettling feeling.

Accompanying the title track of this album is a “raw and captivating demo version” of the same track. This is actually my favorite of the two with a raw, stripped-down performance focusing more on art and creativity. The change in the sound, and intensity of the guitar from the other version of this song, allows there to be more focus on the lyrics and meaning of the track.

The EP also “offers two previously-unheard recordings from the ‘what we say in private’ sessions.” First is the “reflective and melancholy ‘perfect world.’” This is another track that will entice you to let your mind wander, leaving an unsettling feeling. There was a point in the track where everything changed, capturing the attention of the listener with it. However, the ending definitely threw me for a loop with the creative arrangement of an instrumental piece, focusing on a darker, more psychedelic feel.

Secondly, the “sparse and dream-like ‘jade’, which was inspired by a John Updike short story.” The melody at the beginning is soothing. The vocals are soft, yet raspy at the beginning before becoming higher. The repetition in the melody enhances a dream-like state yet leaving an unsettling feeling overall.

With what seems to be a strong focus on creating an artistic masterpiece and a “fascinating glimpse behind the curtain, Levy says that the new EP should be seen as being ‘like a second cousin’ to ‘what we say in private’ [her previous album]. ‘We included the songs that we still felt close to,’ she explains, ‘but didn’t seem to have a place on the album.’” With such an interesting description of an EP, how can you not want to check it out?