Home / Interviews / Five Questions With All The Time Everywhere

Five Questions With All The Time Everywhere 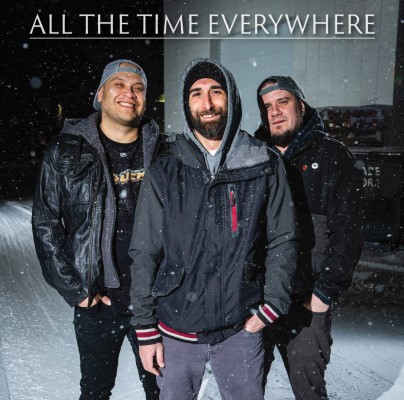 Banff, AB-based rock/ skate punk band, All The Time Everywhere recently released their single, “Sale”, which is from the band’s upcoming album, The Long Con.

Check out the lyric video for “Sale” below and find out more about the band via our Five Questions With segment.

Hey! All The Time Everywhere from Banff, Alberta

A lot of the songs are written on the acoustic guitar and then moved to the band setting. I wrote a song at work once without a guitar in sight. I write whatever I’m feeling and it is accompanied with a pace and energy to suit. Punk/Rock/Alternative style music with a taste of something else. Each song is different on the new record. We haven’t released it yet but one song is basically a country song and has Pedal Steel parts and acoustic guitar but is heavy as f#*k. You would really have to listen to it. I’ve asked people what genre or band we sound like and literally everyone says something different. Our band name suits us because we literally are everything.

We are touring in August in from Alberta to Ontario/Quebec and back again as of right now. We are Headlining the Phoenix Take Over Music Festival on August 16th in London, ON and we playing a Punk/Metal Festival 2 in Canmore AB July 25th. Those are the noteworthy shows we are a part of so far. For the remaining dates head to Facebook.com/allthetimeeverywhere

Listen to “Sale” on any digital streaming service (Apple Music/Spotify/Tidal etc.) It’s our newest release from our upcoming record “The Long Con”

I think my (Aaron) favourite Canadian band is………..tough one. I’m right into Silverstein’s new record right now. Propaghandi is my favourite band ever! I should have asked the other dudes what they like. Terry the drummer loves MUTE from Quebec City. We were listening to that in the jam space the other day loving it. Anywho I gotta piss off and pick up some bent metal. Thanks for the interview! Peace.