Home / Albums / Award-winning artist JJ Voss invites people to heal, unite and grow with his new album Come Along With Me

Award-winning artist JJ Voss invites people to heal, unite and grow with his new album Come Along With Me 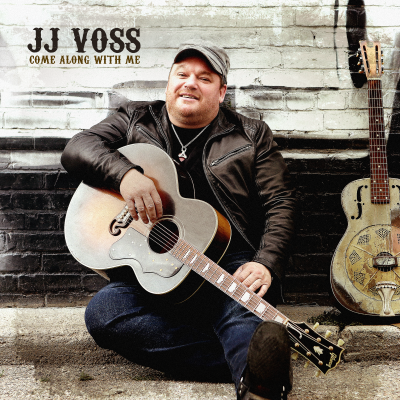 PLEASE NOTE: Saskatchewan Country Music Award nominee JJ Voss has made the decision to postpone his album release tour throughout Saskatchewan and Alberta that was scheduled from March through May 2020. Voss’s new album Come Along With Me will still be released through all music outlets Friday, March 20, and he will be offering a free online live concert to the public that same day at 8:00 pm CST through his Facebook page, JJ Voss.

This decision was made in light of the COVID-19 pandemic and government recommendations for social distancing. The health and safety of the public, and of course the wellbeing of JJ’s fans, band, and all venue staff take first priority. Voss promises he will be rescheduling the shows as soon as possible and asks ticket holders to hold onto their tickets, they will be contacted with new dates as soon as they are available. Fans are invited to sign up for his email newsletter on his website jjvoss.com and follow him on Facebook for regular updates because there will be new online performances coming soon!

Now on to his album and more:

Good things are coming to Saskatchewan country music artist JJ Voss with his new album and single in hand, his 2019 SCMA Roots Artist of the Year award, his recent garnering of three 2020 SCMA award nominations and his upcoming Western Canada tour. This country and roots singer-songwriter who hails from Regina, SK, is not only released his latest single “Come Along With Me” on Valentine’s Day, he is also proud to be releasing his third album, Come Along With Me, on March 20, 2020, followed by a Western Canada tour. He is back in the spotlight and is stoked to take his career to the next level.

Voss believes that his music should take a stand for what is right, so his vision is to see that his music is relevant to today’s social issues. Because he is inspired by great singer-songwriters like Steve Earle, Jason Isbell, Johnny Cash, and Jim Cuddy, Voss is compelled to create something constructive with his voice and his music. He has “become known for his ability to fuse the classic country sound into music that’s perfectly suited for modern times.”

Due to Voss’s major back surgery and being bedridden for close to a year in 2017, his career was put on hold so he could recover. He took that time to digest the current social trends involving nationalism, tribalism, polarization, division, and violence – all of which weighed heavily on his mind. This time gave him the opportunity to dig deep into his soul and write from his heart. From this reflection, Voss put pen to paper and wrote his third album, Come Along With Me.

Says JJ Voss of the title track from his album,

“My friend and co-writer Dean Kush and I wrote a love song to society called “Come Along With Me.” It’s a passionate plea for us as individuals to put in the work it takes to be better citizens and to heal the divisions which have weakened us as a benevolent people.”

This single makes you imagine yourself in a southern church  – where a song is intended to be pelted out. It’s very uplifting.

The single “Come Along With Me” is available here or you can check out the video below:

This nine-track album was produced by Murray Pulver, an award-winning musician, and producer (The Bros Landreth, Doc Walker, Crash Test Dummies), at Touchwood and Sign Post Studios. It was mixed by Paul Yee at Stereobus and mastered by Peter Letros at Wreckhouse Mastering. The combination of songs that get better each time you hear them and the superb production make for a very strong album; each track deserves a place on Come Along With Me. My favourite was the bonus track, “Farmer’s Song.” It’s the timeless and classic tune originally recorded by Murray McLaughlin. It features another Saskatchewan artist, Darlene Tuleta and country music legend, Charlie Major.

Take a good listen to this album; you won’t be disappointed.