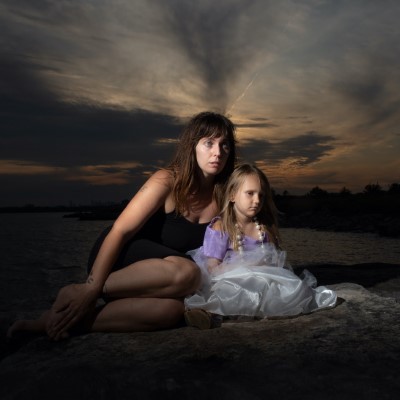 A lot sticks with me after listening to this latest work of art by U.S. Girls (and it does come off as exactly that: a work of art). Given that, it’s hard to decide just what to focus on.

Heavy Light covers an impressive range. From the disco-fuelled opener, “4 American Dollars,” to the Latin-leaning “And Yet It Moves,” to the austere stomp-clap emulating rhythm of closing track “Red Ford Radio,” the music walks listeners through a myriad of moods and genres. It’s a zigzagging path, and you never know for sure what to expect around the corner. Yet nothing about it feels haphazard.

Giving the album a cohesive flow are the captivating voice and words of Meg Remy, the creative force behind the U.S. Girls moniker. Whether passionately plaintive like in “IOU” and “Denise, Don’t Wait,” or darkly buoyant like in “Overtime,” the singer shines in any context. But due credit must be given as well to her phenomenal team of supporting musicians, marked most notably by classical percussion and choral mantras. They form a powerful foundation for any given track and are often at the forefront. Not only that, but they also lend their spoken anecdotes to the overlapping childhood recollections interspersed between songs. Some of these are wistful, while others recap trauma and tension, the sum of which reflects the emotional and lyrical content of the album at large.

Heavy Light might make you smile, as much as it might make you want to cry. Here, the music of U.S. Girls is a heartening affront to a world that sometimes leaves us feeling jaded. It’s a reminder of the interplay of pain and joy, of experience and innocence, of conflict and unity and the resulting vulnerability of it all that makes us truly human.