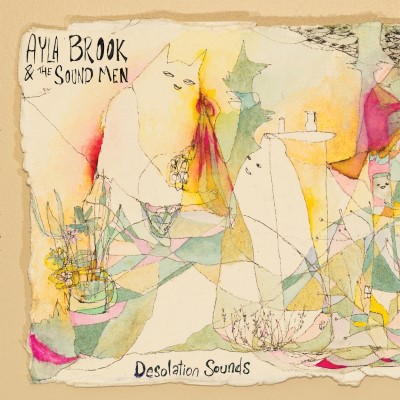 Few have had as storied a career in the Canadian roots-rock scene as Ayla Brook. The singer-songwriter out of Lily Plain, Saskatchewan and former frontman of popular roots band AA Sound System is back with a brand new solo album, Desolation Sounds. Backed again by his band The Sound Men, Ayla Brooks and co. continue to hone their craft on this 11-song roots-rock rollercoaster.

Desolation Sounds captures an intriguing cross-section of influences that result in a record that tastefully balances upbeat classic rock riffing and explosiveness, with the spacious, chill delivery of indie rock, and the twangy danceability of country and folk music. The record’s opening track, “Lift You Up”, hits hard and fast as it blasts the album open with some big distorted guitar riffs. The classic rock influence is strong on this catchy, uptempo guitar-heavy opener. Track three, “(I Think I) Hit My Limit”, was the lead single for the record. This four-minute track takes on an almost tropical tone with a simple pulsing bassline, some plucky acoustic guitar, and some smooth backing vocals to help set the scene. Immediately following is “She Smiles Like a River”, a stripped-love song that provides the first real change of pace on the album. The stomping, emotional track exposes Brook’s more vulnerable side as he sings accompanied by only his guitar, a lap steel, and the voices of his bandmates. “A Little More Light” is by far the best display of all of the elements that cause this album to succeed. It’s a driving, rocking song full of country-tinged riffs all within a soft and sunny indie rock aura. The record closes out on “Refuge Cove” and “Who Are You”. “Refuge Cove” tells an emotional story about one’s father and coping with aging and death, backed up by a strong, steady beat that evokes a strong sense of hope perseverance. “Who Are You” quiets things back down and offers one final reflection and pleads with the listener to “love equally”.

Desolation Sounds is a highly refined, highly emotional record that evokes strong feelings of hope and redemption. Ayla Brook & The Sound Men have captured a balance between melancholic vulnerability and explosive redemption on this record. Each song is like a self-contained life lesson that draws you in with infectious danceable roots-rock music and sends you off with a sense of renewed hope in the world around you.