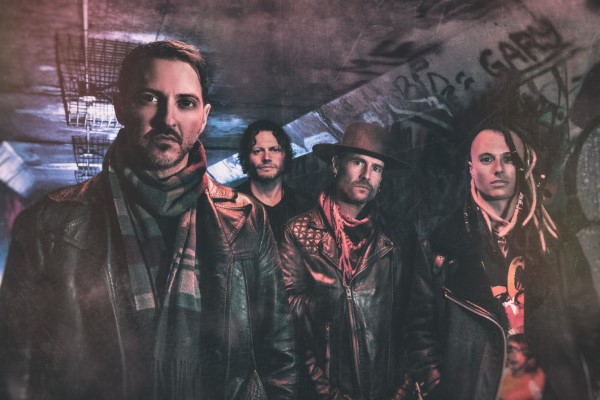 Having just dropped a brand new video for their single, “Killed The Love”, Canadian hard rock supergroup Bonds of Mara is currently out on the road in support of the new track.

Boasting an impressive lineup of members from a number of high profile Canadian hard rock bands, including My Darkest Days, Default, Hail The Villain, and Sons of Butcher, Bonds of Mara looking to keep making waves in the scene.

Canadian Beats had the chance to chat with Bonds of Mara and get a picture of what direction they plan on taking this exciting new project.

Your debut single, “Lights Out”, made it all the way up to the #15 spot on the Rock Radio charts in Canada. Did you ever expect to have such immediate success with the release? What was it like having to follow up such a big success with “Killed The Love”? Do you expect a similar reaction to the first single?

When you put music out there you always hope that it will be a success and that people will grasp on to what you are doing. Also, we wouldn’t put something out there if we didn’t feel we had something good to offer. We were pleasantly surprised by the success and hope for greater success and a further reach with Killed The Love. We think that KTL is more of a cross over track and that more people will be able to relate to it.

The band is obviously comprised of members from several successful Canadian bands. What was the process like in honing the sound of Bonds of Mara to sound like an entirely new band? Which past influences did you have to take or leave to produce the sound that the band is putting forward now?

The process was simple. The most important aspect of this band for us is that we play what we feel and what we like and do not put boundaries on ourselves as a band or an individual. We don’t set out to sound like this band or that band. We want the music to come naturally and effortlessly with the least amount of resistance. All of us have so many influences that range from the dirty 70’s funk and rock to the 80’s pop culture and the endless great bands that changed music in the ’90s. All of those elements will come out in our music in some form or fashion.

As veterans of the Canadian rock scene for some time now, could you describe how you’ve come to grow and adapt to the always-changing music landscape that you work in? Has the shift from prioritizing FM radio airplay to maximizing streaming numbers changed how you present yourselves or your music?

Being diverse is the only way to survive in today’s musical climate, and to continually grow and adapt as an artist is what has kept us going and keeps us coming back to it. The way music is put out there and consumed is very different from when we were all active on the radio, so now we are all learning the different ways to reach an audience. It’s kind of like surfing.

Try and catch that wave and ride it for as long as you can and try not to get eaten by sharks.

Are there any plans in the works for an upcoming full-length album?

Yes, that is something that we have been talking about now for a while. We are hungry to create more music and collectively we have so many different ideas that we want to bring to the table. Not to mention we want to give people more to chew on at our live shows than the two songs we have released.

What music are you listening to these days? Are there any up-and-comers in the scene that you are excited about?

To be honest, we have all been listening to a lot of older music and discovering some new old bands from the past. That being said there is always good music where ever you look and from every era. Some of the new upcoming bands within our scene that excite us are The Vidos, Chase The Bear, Imonolith, Celestial Ruin, and Hot Lips.