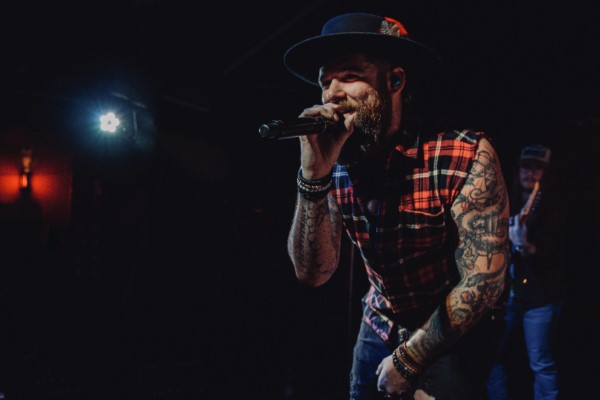 Manny Blu is a former MMA fighting turned Canadian country music rising star, and he is set to drop his debut full-length album later this year.

The Montreal-based musician is hot off a residency in Nashville and is looking to follow up the success of his debut EP, Leave It Like It Is, with new music and a run of tour dates to come this year.

Blu is currently on tour in Ontario. Canadian Beats was able to catch up with him to talk about his come-up in the country music scene.

What was it like putting together your debut EP, Leave It Like It Is? Was this your first experience writing and recording an album? What did you learn about the process that you may not have expected?

There wasn’t a whole lot I expected, because it was my 1st experience putting an album together. Going through songs that you realize are eventually gonna be “YOUR” songs is a pretty cool feeling. Learning the process of how records are made in Nashville was a beast in its own. It taught me how to hear things I wanted in my first album and in the next ones.

What can fans expect from your upcoming full-length album? What new elements were brought to the table this time around?

The next album will probably be an EP as well. However, sonically it’ll pull more from my musical influences like blues and southern rock, and there will be, of course, an element of country. I’ve found that country music has a lot of different colors and styles and the next EP I believe shows that!

How has your time in Nashville impacted you as an artist? What did that experience offer that has helped you?

The time I’ve spent in Nashville is everything to me! There is a vibe and a culture for musicians down there that is unmatched and indescribable. It’s just a different world and it for sure helped form me as an artist and respect the history of country music. Once you know who came before you and what country music was, it’s easier to feel comfortable and confident in where we can push boundaries and not disappoint the whole country music community.

Could you speak to your transition from martial arts to music? Do you see any similarities or crossover between the discipline of martial arts and musicianship? What drew you to want to pick up a guitar?

Besides the showmanship, I’d say there isn’t too much that crossover. The biggest thing I learned in MMA was to be ready for anything that is unexpected and just roll with it, which has helped me in all aspects of life. What drew me to guitar was B.B. King with his soulful blues playing and John Mayer for his solo acoustic performances. I just loved how both those guys play(ed) with so much feeling and they have inspired what I wanted to do!

Where do you draw your inspiration from when writing music? For example, do you look externally towards cultural mediums like books, movies, tv, society-at-large? Or do you look inward and work from introspection and your own experiences?

When picking the songs for an EP I like to have songs that I can relate to, or is close to what I experience in my day to day life. I want to have fun on stage, so besides maybe some deeper love songs, I would say my inspiration are tracks that allow people to have fun. I just like singing fun drinking songs.

If I ever wrote a song that Jason Aldean would cut, that would be pretty unreal. But I wouldn’t hate being in a writers room with HARDY, dude looks like a beauty and a fun hang.

Playing a hometown show is always unbelievable, and we are heading back there on March 15th. The last tour, however, we played a show at the Social in Peterborough, which I can’t wait to go back to on this tour and  Brock University really brought the party energy. Those were some of the best shows we have played as a band.

Like I’ve mentioned earlier, I think there are so many different colours in country music now-a-days and I don’t really need to step outside of the genre to find whatever I’m in the mood for. From Morgan Wallen to Aldean, The Cadillac Three, Lynyrd Skynyrd. But I do have a buddy down in Nashville, Blaine Holcomb, and he’s someone I’m really excited about — to see how his career evolves. He’s a really good musician and an unbelievable person, he’s an up and comer I’m very excited about.