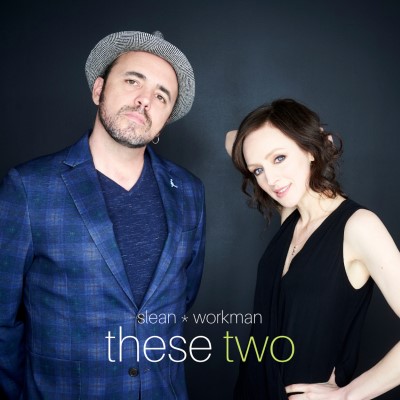 The names Sarah Slean and Hawksley Workman are not unfamiliar to the Canadian music scene. Individually, each has an immense resume of successes and notable releases over the past 20 years. Slean, a composer and songwriter (amongst other titles) “has made eleven albums, toured internationally, starred in short films and a movie musical, published two volumes of poetry, held exhibitions of her paintings, composed for chamber and symphonic ensembles and shared the stage with ten of the country’s leading orchestras.” Workman “boasts a catalogue of 16 releases, showcasing his now signature blend of anthemic folk and show-stopping vocals. [His] touring career has seen him play over a thousand shows worldwide. He’s headlined prestigious venues like Massey Hall in Toronto and The Olympia in Paris.”

Joining their creative forces together, Slean and Workman created their latest EP, These Two, which was released on February 21st. The EP itself is described as “part creative fireworks, part intellectual sparring match, part seance, part sibling spat.”

These Two is a compilation of five tracks; starting with their brand new original song ‘Wound You’. The track is described as being “infused with a pulsing 80’s vibe.” The song itself is “about taking life’s inevitable difficulty in stride and greeting it without resistance. It suggests that the world is meant to break us, and perhaps this is even the aim or necessary lesson of the earth experience. The lyrics conclude that our brokenness is our strength. That it is not just the defining feature of our humanity, but also the key to the evolution of our consciousness.”

The beginning of the track makes you stop and wonder ‘what in the world am I listening to?’ before it takes a turn that one would never expect; as it breaks into that catchy, memorable sound that keeps you moving to the beat. Slean takes the lead, as her powerful vocals add that special touch. The EP finishes with a stripped-down version of the same track, entitled ‘Wound You (smoky version)’. This version features Workman as the lead, with raspy vocals that create a more intense, unsettling feeling.

The EP also includes covers of well-known tracks that Selan and Workman definitely made their own. First, The Tragically Hip’s 1996 song ‘Flamenco’. The addition of a piano to this song adds that extra little something special. It aids in adding a sense of tension to the track, as the melody is slowed down and the vocals more drawn out.

Followed by the popular Joe Cocker and Jennifer Warnes movie single ‘Up Where We Belong’ (written by Jack Nitzsche, Buffy Sainte Marie, and Will Jennings). The slower speed of the track (when compared to the original version) creates a feeling of anticipation giving you the sense that something is going to happen as it builds up to the chorus. The backing music creates ambiance, as the powerful vocals of the duet lay at the forefront.

Finally, a beautiful version of Blue Rodeo’s ‘Lost Together’. This is a slowed, stripped-down version of the original track with focus put on the vocals. The melody focuses more on the piano and the addition of synths. This is a creative touch that is different from the original version, helping to make it their own. Their vocals complement each other as they perform this unforgettable duet.

To support this release, the duo will embark on a tour across Ontario entitled ‘A Musical Evening With Sarah Slean and Hawksley Workman’. “It will be an evening filled with unforgettable music, soaring voices, and plenty of storytelling from their 20 years of friendship.” This is an evening you won’t want to miss!