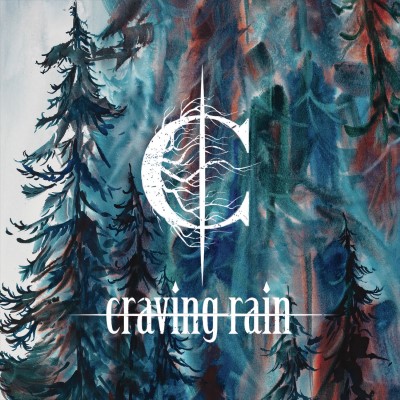 Victoria, BC-based alt-female-fronted rock act, Craving Rain is made up of Jasmine Wietzke and Tyrell Beal. They will be releasing their self-titled debut album on March 19, 2020, but in advance, they have released a brand new single, “Anonymous” which follows their single, “Jealousy“.

Check out “Anonymous” below and find out more about Craving Rain in our Five Questions With segment.

Jasmine: Craving Rain currently is made up of myself (Jasmine Wietzke) and Tyrell Beal. Tyrell is a new member as of November of 2019. He replaced a member I had to part ways with in October of 2019 who I recorded the EP with. We are from Victoria, BC, Canada and are super grateful for living in a part of Canada that rarely sees snow!!

I’m 33 years old and grew up in Calgary, Alberta, Canada and moved to Victoria, BC in 2010 (I never looked back!!). I started playing guitar when I was 10, and then singing and writing songs when I was about 14 years old. I was in an all-girl band in high school with my best friends, which was incredibly fun. I have since been in a few other bands, with my most recent being This Day Burns which was a rock/hard rock band. We managed to release 2 EP’s that are on Spotify!

Tyrell: I am 26 and I’ve been playing guitar since I was 13. I’ve been singing (or at least trying to) since I was 5. I had a childhood full of rock music mostly from before my time but I started to connect with more modern sounds in my teen years and into my 20s. I found myself really gravitating towards heavier styles of music and by the time I was 20 I had started to figure out some more aggressive vocal techniques. I started my current band, Sonderous, when I was 21 and have been going hard to make things happen with that. In the last year or so, I’ve found myself interested in applying myself to another project that is spearheaded by somebody else in order to experience the other side of that relationship – that I kinda have with my band. Interestingly enough, Jasmine messaged me in need of a guitar player and I jumped on the opportunity. I saw her a few years back and I loved her sound and vibe…it’s been cool singing some harmonies and such with her as well as applying my guitar-brain to her songs. Stoked for the future!

Jasmine: I would describe Craving Rain’s sound as acoustic alternative rock but there is a singer-songwriter vibe in there as well. I was really inspired by The Cranberries, Silverchair, Nirvana, Tool and Flyleaf when I was younger which really shaped my vocal style and also my writing style. I’ve been told a lot that I have a 90’s influence in my songs, which makes sense because I grew up in the ’90s!

Tyrell: Jaz writes the songs, I’m just trying to make her ideas sound the best they can…and we have some similar influences and our styles just seem to be working together quite naturally. I’m very excited to continue working on new material and see what we can do together. Not to take away from the EP, I love these songs and it’s been great to apply myself to them…I’m just excited for the future!

Jasmine: Yes! We have our EP release show on April 23, 2020. Initially, I had hoped to have it the week of the actual EP launch day (March 19, 2020), but it worked out to be about a month later with the venue we had decided to go with (Darcy’s Pub in the Westshore). I think it’s good that we have a little more time to prepare for the show since introducing Tyrell to the band only last November.

Tyrell and I haven’t performed live together yet but I could imagine it would similar to when I perform on my own…but 10x better! Our EP release show we have added a third performer to our set for some of our songs. Cade King-Wilcox of Sonderous and Kings & Cobras will be ripping it up on some hand drums. He’s super talented! We are working on an epic cover of Tool’s “Right in Two” and he does an amazing job of transcribing Danny Carey’s rhythmic complex beats. I’m hoping he’ll join us on stage many more times in the future.

When I perform, I sing from the heart and transport myself back to when I wrote the song, which is a very cathartic experience, so I would say it’s powerful to watch and I usually command attention since I’m usually belting my face off haha. I usually sing about sad situations I find…so there is a melancholy vibe to a lot of the songs I write. This is the kind of music you’d generally wanna listen to while sitting around the campfire, all bundled up and cozy with some boozy hot cocoa! I’ve been told by some that my music makes them contemplate life…and want to change for the better. That comment warmed my heart!

Jasmine: I think it would depend on what kind of person you are! If you like powerful, more upbeat acoustic rock, then I’d suggest “Anonymous.” If you want something to chill out to, I’d suggest “Jealousy.” If you like something with a bit of a hipster vibe and wanna throw on your overalls, I’d say check out “Family.” If you’re in the mood to long for true love, listen to “F*** The Distance.”

Jasmine: I’ve been super into electronic music lately…so Neon Steve is killing it these days. I love a local band called the Fortune Killers (previously Isobel Trigger). They have a song called “Dust and Bones.” I can’t get enough of that song. I love Felicia’s voice – it’s so magical!! I feel bad I haven’t paid attention to more new Canadian bands lately…I’ve listened to a little bit of Our Lady Peace recently and it’s bringing me back to my teen years…good ol’ nostalgia…I cranked it while I was just recently on vacation in Isla Mujerez, Mexico. I’ll always love Alanis Morissette (who I’ve actually been compared to, vocally…which surprises me actually!). City and colour…his voice is so soothing…I love the simple acoustic stuff a little more than full band though. And just like Tyrell, I love Alexisonfire. I will NEVER get sick of the Watch Out album.

Tyrell: Big Wreck, Alexisonfire, Devin Townsend is a national treasure…but this list could go on a ways lately…haha. There’s honestly too many to list though I think haha. Lots of new or new-ish bands I’m discovering that are seriously awesome. Spiritbox. They absolutely slay. Also, Rush is endlessly fantastic…been diving down the rabbit hole since Neil Peart’s passing…still lots I hadn’t heard. Many of them made some unreal stuff haha.