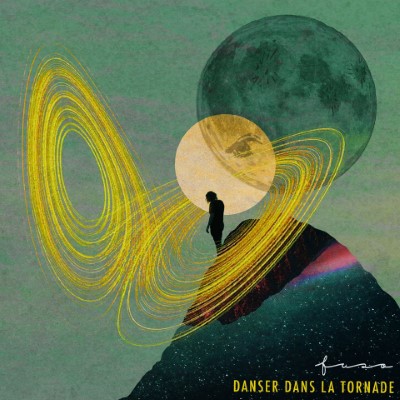 Fuso is back with his second studio album, Danser dans la tornade. This album is the follow up to his 2016 self-titled debut album Fuso, which introduced us to Fuso as a solo artist. Fuso is passionate about waves, beaches, and good music and uses those passions to fuse his music with his influences from reggae rhythms and storyteller style lyrics.

“I had a lot of fun putting this album into the world. A second album is something very exciting for me. It is a homecoming, but from a more mature, more rooted point of view. However, I kept this desire to travel with music, so you can hear on this album several colors, styles and states of mind, which describes me perfectly.” explains Fuso. **

Danser dans la tornade opens up with “Quand j’aurai mon voilier,” which was written in 1951 by his grandmother Annick Rouot. Fuso honors his grandmother and his musical hero by capturing the song in its original style and arrangement with his own unique, artistic stamp. For Fuso, this song is a family treasure and it is proof that music and the desire to see the world is genetically transmissible. Fuso leaves the song beautiful and completely pure.

“The album often addresses the theme of love, evident in the songs “Higher Me,” “Fly Away,” “Recommencer tout” and the new single “Tornade.” I am convinced that the beauty of the world is in its chaos, in its tornado. And I believe from the bottom of my mind, that when you stop fighting continuously against the universe, you finally find your place in it.” says Fuso. **

Fuso uses his musical talents to highlight different themes. Most importantly Fuso spotlights the theme of hope. “Chance,” “Perds pas le moral,” and “Chasseur d’étoiles” are some of my top choices on the album and they all take on their own individual story with Fuso’s musical style and his ability to create meaningful lyrics.

“Higher Me” was one of my absolute favorite songs on the album. I instantly connected with the lyrics and the arrangement. Often we know that pain of falling in love with someone, but they don’t turn out to be exactly who we thought we fell in love with. Fuso captures those emotions with all of the right words.

Another one of my favorite songs on the album was “Fly Away,” as well as the tune “Nos souvenirs” ended up on my personal playlists too. I fell in love with the overall sound of this album. Fuso creates music that has a natural flow, an organic (yet warm and rich) sound, and is able to capture true emotions in the recording process. When you listen to Danser dans la tornade from start to finish you are pulled in to each song which is almost a mini story, and a chapter in Fuso’s musical history.

“I had the chance to work with Dimitri Lebel for two songs. The rest of the album was done at home, behind William Gaboury’s console at Studio Tangerine. We have, to my delight, given, in this second album, a greater place to percussion, as well as to the organic universe.” concludes Fuso. **

With the album out now in both digital and physical format, you can catch Fuso performing live at his album release party in Montreal, QC on March 9, 2020 at Le Ministère. The album release party is free to the public and all music lovers are invited to hear these new songs, and some for the very first time in public.