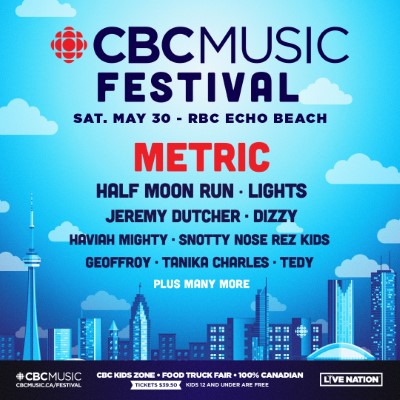 The annual CBC Music Festival is back for its eighth year, this time playing host to artists such as Metric, Half Moon Run, Lights, Dizzy, and many more.

The festival is set for Saturday, May 30 at RBC Echo Beach in Toronto. There will be five stages, including one hosted by the voice of CBC Radio’s q, Tom Power.

There will also be kids programming at the festival and a variety of smaller stages for up-and-coming Canadian artists to showcase their talents.

Tickets go on sale Friday at livenation.ca for the public, however, a special presale begins on Thursday at 10 a.m. for American Express cardholders.