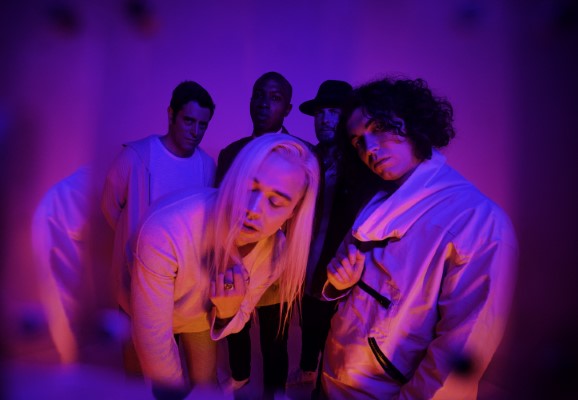 Vancouver’s indie-pop all-stars in Fake Shark are back with a new single called “Bad Chemistry”.

The track follows up their last single “Invincible” which dropped in late 2019.

Canadian Beats had the chance to speak with the band about what they’ve got planned for 2020.

Your music draws from a fairly wide range of influences and genres that has resulted in the unique sound that makes Fake Shark. Do you feel as though your band belongs to any specific scene or subculture? Or are you hoping to avoid labels?

At this point, we try to stay cohesive but adventurous. We like so many different styles of music. The worst thing to find out about a band or an artist is that they only listen to their own genre. If that’s the case, how do you plan on providing us with something unique if you’re just playing by the rules?

Fake Shark has had music featured in a number of films and TV shows over the band’s history as well as some experience in original scores as well. What would you say is the band’s relationship is with other forms of art, like film and television? What does it mean to you for your music to be heard outside the context of your own albums, but in a film or TV show?

Our taste just happens to be very cinematic. When I (Kevvy) write, I need to feel something from the chords, textures, and words, so it just so happens to go with movies and tv shows. I’m very emotional (too emotional?) when it comes to what we create and how it makes me and people feel.

The band has obviously been around for a long time at this point, with your debut album now over ten years old. How has the last decade shaped who you are as a band, especially coming from the era of MySpace to 2020? How has time and an always-changing society affected how you approach music?

You know, I don’t actually consider Fake Shark Real Zombie and Fake Shark to be the same band. We were this close to changing the name completely when we put Cheap Thrills out, and we don’t really play those songs anymore. Our sound is totally different. FSRZ was very punk rock and chaotic and FS is very groove-oriented and melody-driven. I suppose the transition was when we wrote Paint It Gold, which is still one of my favourite things I’ve ever done. The only through line is that Louis and I (Kevvy) are still in the band. I still love that stuff, but it’s very separate to me.

The spectrum of myspace being a place where people go to see your photos and listen to your music to now Spotify and Youtube providing that is interesting. It’s more professional but less personal. I know most people discover new music from Spotify playlisting, so I suppose that’s better for the artist.

Is there a specific sound, influence, or technique that you have always wanted to find a way to incorporate your music, but haven’t yet been able to? A new genre to dabble in? A new instrument to bring into the mix?

Great question. I want to do a really lavish string section on the next one. I also want to then chop it up and glitch it like Phantogram do with vinyl samples.

Could you describe what it was like to achieve such immediate success from Japan? How did it come to be that your music resonates so much in a culture that many in Canada may see as quite distant from their own?

Fake Shark Real Zombie did a bunch of touring in England with a band called Test Icicles (featuring Dev Hynes (aka Blood Orange), and whatever is cool in the UK is always also cool in Japan, so that’s how they found us!

What plans does Fake Shark have for 2020?

We have a new album dropping we’re excited about and some ridiculous music video ideas. Also, some tour plans are forming shhhhhhh….

What music are you listening to now? Are their any new bands you are obsessed with?