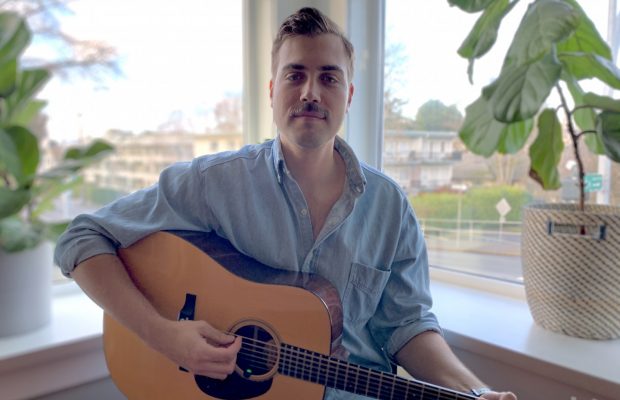 We caught up with him for our newest segment of Five Questions With, so take a few moments to find out more about this talented Canadian artist, and check out his live video for “Six Days in December”, which is the first song off of his upcoming EP.

I’m J.R. Proctor – a songwriter and musician currently living in Victoria, British Columbia. Daydream Sommelier, my debut EP of original music, comes out on March 6th, 2020 and I’m excited to share it with Canadian Beats!

For the past few years, I’ve played traditional music with Stardust Stringband. During this time, I started to write more of my own original music. These songs eventually turned into Daydream Sommelier. I’ve spent a bunch of time interpreting and performing forms of traditional folk music – primarily bluegrass, old-time and traditional country. At the same time, I’ve always loved the immediacy and vitality of pop music. I think a lot of my own music is me trying to map out where the intersections of these genres exist.

While my songs are rooted in the folk tradition – and are influenced by my time spent performing traditional music – they explore a lot of contemporary themes that extend beyond the confines of any particular genre. I’m fascinated by the continued relevance of traditional music – basically, trying to find out what is it about old music that still resonates today. I think my music is an extension of that fascination.

I’m pretty excited about Daydream Sommelier because it’s the first time I’ve recorded my own original songs. It was a bit of a departure from playing bluegrass, but I had a great crew of musicians that helped this album come to life: Marc Jenkins (Pharis & Jason Romero) played pedal steel, Jason Cook laid the foundation on drums and Darrin Wiebe kept it steady on bass. The EP was recorded and produced under the guidance of Adrian Dolan (The Bills, Ruth Moody) at Marlborough Studios in Ladysmith, BC.

I have a few upcoming shows that I’m excited about!

We’re having the release party for Daydream Sommelier on March 13th at the Heatley in Vancouver, BC. It’s a small, intimate stage that I’ve been lucky enough to play on many times before – it felt right to do the launch at a place that felt like home.

The next day (March 14th) we’re heading up the highway to the Brackendale Art Gallery in Brackendale, BC. This place must be one of BC’s most unique venues. It’s a hand-built wooden building filled with eclectic cravings, statues, and art. If you go inside when a show is on, you’re pretty much guaranteed to see amazing live music in a great sounding room.

For both these shows, I’m bringing the full band – it’s going to be a-happenin’! For more shows, check out www.jrproctor.com/shows

I’d recommend the first song off the EP: ‘Six Days in December’

A few years ago, I was living in the North End of Halifax – a part of town that was destroyed by the Halifax explosion. While there, I got to know the story of Vince Coleman a bit better. He was a train dispatcher who gave his life to stop an incoming passenger train. His final dispatch left a mark on me: “Hold up the train. Ammunition ship afire in harbor making for Pier 6 and will explode. Guess this will be my last message. Good-bye boys.”

I wrote ‘Six Days in December’ after hearing his story.

Right now, I’m really inspired by the music my friends are making: Real Ponchos are a psychedelic country band with a gift for writing songs that you never want to end; Robbie Bankes is a super talented musician who comes up with melodies that follow you through life AND can seemingly play every instrument invented; and finally, Twin Bandit are a female folk duo that, whenever I hear them sing, remind me of the raw beauty of harmony singing.

And this is only a sample! I feel super lucky that many of my friends have been involved in such cool musical pursuits – their approach to music definitely impacts the development of my own work.