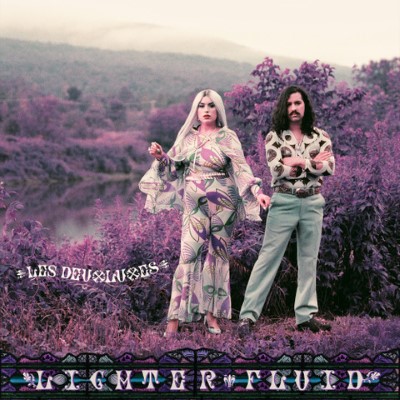 Montreal’s Les Deuxluxes have put together a catchy and memorable record that will keep you on your toes the whole way through. The duo of singer/tenor-guitarist Anna Frances Meyer and multi-instrumentalist Étienne Barry are back with a follow up to their 2016 full-length release, Springtime Devil, with a new record that ups the ante for the exciting and dynamic rock and roll duo. Lighter Fluid is an album that treads an often tricky line between being both infectiously catchy and very technically impressive with an inarguably high degree of success. What results is a legitimately captivating blend of influences from psychedelic rock, old school 60’s rock and roll, elements of jazz and lounge flairs, and even a touch of some twangy country guitar on some tracks.

Right from the opening title track you can tell the angle Les Deuxluxes are coming from with the fast-picking guitar melody that drives the song through to it’s incredibly catchy, singalong-inducing chorus that could bring to mind any number of classic 60’s rock and roll artists. “I am the Man” sees the band telling a stomping, twangy cowboy story, punctuated by some dark western guitar leads and delivered by Meyer’s commanding vocal performance where she declares that she is, in fact, the man. “For I Myself” is a definite standout on the record as it sees Barry showing off his impressive musicianship, providing not only guitar but flute leads as well to this toned down, psychedelic journey of a track. Another unexpected turn taken on Lighter Fluid is the fact that the band is just as capable of writing great songs in English as they are in French, as can be heard on “Vacances Everest” and the lounge-inspired “L’insistance”. Perhaps the biggest standout on the album is the ripping rock and roll track, “Down on the Street/Loose” which features some fun back-and-forth vocal dynamics between the duo that build an interesting, dare I say, sexy tension that resonates throughout the song.

Les Deuxluxes’ latest outing with Lighter Fluid shows off the undeniably impressive range of influences and abilities possessed by this Montreal-based duo. Each song gives the listener a taste of something a little bit different, but the tone and quality of the album as a whole never waivers. There is a song for everyone on this album, whether you’re a dancer, a rocker, or a shoegazer, Lighter Fluid no-doubt has something that will make you happy.