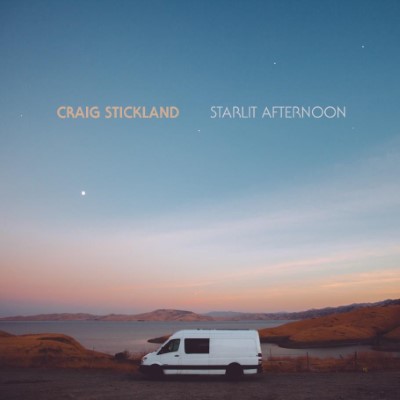 Four years after his first, Vancouver’s very own and Toronto claimed Craig Stickland has graced us with his second full-length album Starlit Afternoon and I can promise you if you don’t listen to this, there’s a whole other sixth sense that you’re missing out on.

After using his label advance to purchase a Sprinter Van to reside in while recording in California, Stickland travelled for inspiration, recording stripped-down, acoustic performances in national parks around California with studio equipment powered by his vans solar panels. Maybe it was the 9… yes… 9 letters from the urban streets kindly pleading him to not park under their streetlights that lead him to the outskirts of town for a different kind of light to call home for the night… A starlit night if you will!

The title track “Starlit Afternoon” gives us a strong opening, written while touring shows and festivals with Alessia Cara, Stickland was inspired to encapsulate the feelings of falling for someone new at a music festival, while dancing and belting out lyrics underneath a Starlit Afternoon. This song is picture perfect and so passionate, it starts out with an in-studio vibe and quickly turns into the perfect illustration of “When did I get to Coachella, how did I get here so fast, I never want to go home.”

Previously released singles “Rolling River, Warning, Stop at Nothing” and one of my favourites “Break Every Rule” are featured on the album. “Break Every Rule” is about being in so deep you’ll do absolutely anything and everything to prove yourself to the one you love. The through-lines between Stickland’s work and that of an upbeat, pop-centric Hozier are hard to ignore.

Stickland’s songs speak for themselves as he keeps us in the loop of his deepest thoughts and feelings, for example, the track “Golden Child” where he sings about the beauty two could create and bask in and we are definitely here for it.

“Love We’re Gonna Lose” is a song I’m sure one too many of us can relate to all too well. Questioning your worth over a very trying and testing relationship, waiting on calls never dialled, words never spoken, feelings never lost but a battle lost between souls, is this a Love We’re Gonna Lose?

We can thank quite a lot for Starlit Afternoon and Craig Stickland, credit due to the beautifully lit starlit nights and friends that follow. Either way, a man who sunk everything in a dream or a wish has certainly made it all come true.

Our indie-singer-songwriter-multi instrumental- Scott Pilgrim cameo man (don’t think we didn’t notice) closes the album on a note that took course over five years. To reminisce on past loves, promises, quirks and thoughts that take over your mind and make you realize how much it takes to find Good Love and once you do it feels impossible to get them off your mind.

All in all the album is a skillfully produced, cohesive gem that will surely be the soundtrack to your 2020 summer playlist, overall this album seems to be strongly inspired by all sorts of love, theres songs to shed a tear too, sing along at the top of your longs in the shower or the car, or mellow out and fall asleep to. As long as his wheels keep turning, I don’t think this will be the last we’ll be hearing of Craig Stickland, and I can only hope for some tour dates to come!

I’m 23 years old, I’m from and currently living in St.John’s, Newfoundland but spent most of my life living in Ontario.

I’ve seen well over 60 artists, all with my phone or camera in front of my face recording the entire thing, making sure I got the best picture I could, wondering how to get myself between that barricade taking A+ pictures… Well, hey look Ma’ I made it!

I love such a wide variety of music, I go from vibing to Return of the Mack, crying over Marianas Trench, doing the In My Feelings dance, I’m all over the place. Other than that you can catch me snacking, sleeping, or cuddling with kittens!