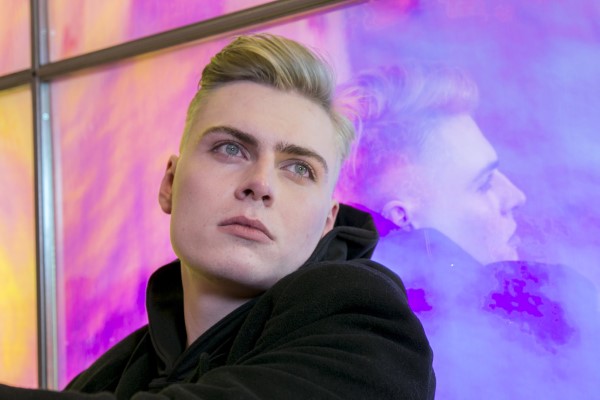 Born in Orangeville, Ontario, Strange has been in the world of music since childhood – taking various lessons, participating in local theatre productions, and singing for anyone who would listen. He began writing pop-centric music after meeting his now-friend Andrew McArthur. While studying film scoring in college, and developing his technical skills, he quickly realized he belonged in the world of pop music.

Strange says some may call his style “Alternative Pop” – he finds his influences from various genres. His love of Toronto’s music scene has inspired him to incorporate new styles, while always staying true to his voice. He turns to bands like Bon Iver, Queen, and Kesha for inspiration; whether it’s the lyrics or the musicianship, each contributes to Strange’s musical progression.

His parents have always been part of his support system, but it’s his own journey with mental health that holds the most weight; Strange tells us “I struggle with anxiety and depression, and sometimes that puts me in positions where I shouldn’t be- reacting poorly during a breakup, or being mad at whoever or whatever. I try to really channel that energy in my music, especially breakups. That energy is so real and I feel it so hard, something about putting it out there in song form is an utterly freeing and empowering feeling.”

As a songwriter, Strange says working with his producer Vivid and guitarist Jordan Santelli pushes him to grow as an artist and constantly evolve his sound. As an independent artist, gaining recognition is a universal struggle for most artists, with a flooded marketplace and countless options for fans, but it doesn’t discourage him from putting out new music as often as possible. In fact, he says all of the hard work is worth it.

Strange released his debut album in October 2019 and now has three music videos on Youtube. He’s already working on new projects and hoping to build on the momentum from his album. A veteran in the Ontario concert circuit, his goal is to break out into more of Canada and the United States, and his hopes are high for 2020.

Check out our February’s Indie Spotlight, Austin Strange on all streaming platforms today.