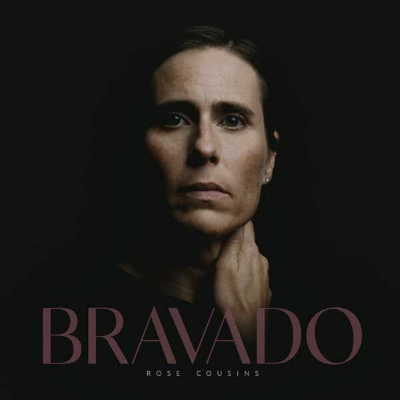 Bravado is the new album from Halifax based artist, Rose Cousins.

Bravado is an album that contains a lot of conflict between its soothing melodies. Struggling with such weighty universal concepts such as love, aging, death, loneliness, desire for connection, the artist leverages her lyrical skill and adept musical arrangements find beauty in pain, and happiness in sorrow. For example, in the track ‘The Agreement,’ while bemoaning to a lover “commitment is too scary, but I’ll cry if you marry,” she also adds, “You know you’re not just any, but you know that you’re one of many.” In other words, the singer finds a silver lining in a failed relationship, that she can try again and find someone new. The album features guitar, piano, drums, horns, violin and generally sticks to gentle folk songs, but occasionally picks up its energy and moves into pop melodies. The melancholic mood, though, can be felt throughout Bravado and would be great company if you’re in need of catharsis.

Standout tracks on Bravado are “The Benediction” and “The Benefits of Being Alone” (and it’s reprise). The track “The Benediction”, as its name implies, has a lot in common with a biblical prayer as Rose makes multiple supplications to her friends, family, and lovers, but most of all to herself. The melody in this song has this aching sincerity that adds to Rose’s, not just want but need to be a good woman.

The track “The Benefits of Being Alone” has a lot in common with the song “Counting Flowers on the Wall” by the Statler Brothers. Using a jazzy piano, horns and upbeat melody, the song lists the supposed benefits of living alone such as “booking flights as places I’ve always wanted to go.” However, the song quickly shows its hand, with lyrics such as “It could be six days to find my body gone, but think of all the space I get to roam” as the illusion is broken that the singer is at all happy with being isolated. The track’s reprise then goes a step further to show how hateful being alone is to the singer as, though the lyrics are unchanged, they are only backed by a slow, downbeat piano. The effect of these paired tracks is incredibly affecting and communicates perfectly the singers struggle for optimism in a cry for help.