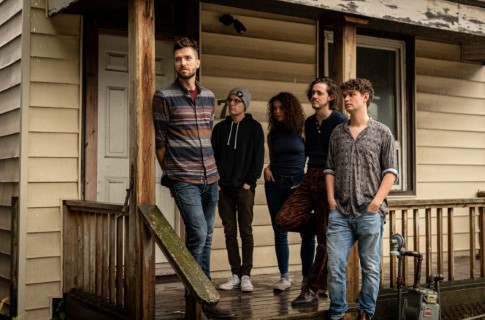 Hamilton, ON-based alternative-indie band, Fake Shape is back with a new single, “Headspace”, from their upcoming debut EP, Night Swim.

It is said that the single drifts through contrasting textures that fall between funk, psych, pop, and ambient electronic.

Check out “Headspace” below and find out more about the band via our Five Questions With segment.

Hi! We’re Fake Shape from Hamilton, Ontario. Chester Edington plays guitar and sings, David Baldry plays keys, synth and sneaks in beautifully crafted, often improvised trumpet parts here and there. Seth Hunter is a wizard of synthesis and also plays a very cool custom-built Baritone guitar that he designed. Seth is also currently working on building a modular synth rig for our live shows. Olivia Brown plays bass and is our primary back-up singer. She totally slays on the bass, her style is very funk-driven and her playing is always pointed and thoughtful. Mackenzie Read is an animal on the kit, like literally think of Animal from the muppets. His energetic performance is the “secret sauce” to our live set – just listen to the fills he wrote for “Headspace”.

Chester writes most of the music and lyrics:

“Usually the songs start from a couple of chords played on either guitar or piano, accompanied by a melody, typically with melody there will be one idea that sticks and then the rest of the song is built from that point. I use voice memos a lot to record ideas then spend a lot of time re-working the ideas in the context of the song. It’s the same with lyrics, I usually have one phrase that sticks then I’ll record a bunch of takes just singing gibberish and from there I can extrapolate meaning and phrases that fit the context of the song, it’s a kind of subconscious flow followed by editing.”

From there the demos go to the band and we work out the arrangement and re-write parts that feel uncomfortable or awkward. Seth and David work a lot the arrangement and direction/trajectory of the songs, trimming, editing and consolidating – making the songs more impactful and cohesive. Sometimes Mac and Olivia’s parts are loosely based on ideas or “feel” from the demos. From there, they take the parts and with their skill and musicianship, imprint their own unique style and personality.  Almost like running them through a giant “no-nonsense” filter. With more recent songs though, we’ll just jam the songs out and Mac and Olivia will come up with their own parts.

We’re playing our first show of 2020 on Thursday, May 7th at the Casbah in Hamilton, we’ll make sure to play more throughout the spring/summer though. Expect constant developments in the live set, we like to have a lot of special moments and build-ups, there’s very little space between songs, we try to thread things together so we don’t lose the vibe and energy.

“Headspace”! it’s currently the only one released at the moment! That being said, we’re all very excited about one of the songs on the EP called  “ ‘Nother Thought ”.

There are so many! So to keep it from being too long a list we’ll just name a few.