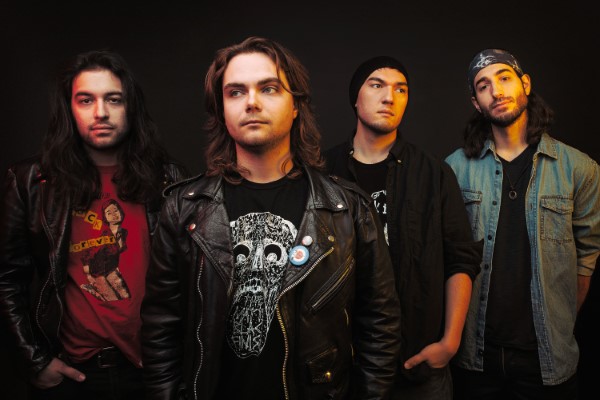 Toronto, ON-based rock and roll band, Drop Top Alibi are back with a brand new lyric video for their single, “Take It All In Stride”, which follows their previous release, “Summer Nights & City Lights” in late 2019. The band will take their inspired live show on the road throughout 2020, so be sure to stay up to date with them via their socials.

Check out the lyric video for “Take It All In Stride” below and find out more about the band via our Five Questions With segment.

Hey everyone, we’re Brandon, Luc, Dylan, and Jeff of Drop Top Alibi.  Brandon’s the lead singer and rhythm guitar player, Luc is the bassist, Dylan’s the lead guitarist and Jeff is on drums and funny joke man duties.

Our music is rock and roll with lots of energy and groove.  We love our guitars loud and our drums and bass locking in together and pounding.    As for our writing style, it’s pretty dynamic in terms of how we approach each song.  Generally speaking verse and/or chorus idea gets brought into rehearsal and we all flush it out and get a solid sense of its direction.  Beyond that, we don’t try to put limitations on where the song could go, sonically speaking.  We’ve been doing a lot of pre-production demos on our own, taking our time with things and embracing the creative process.  We have lots of tunes on the burner just waiting to be released that start to encompass more sounds and broaden our genre, so we’re very excited about that.

We actually have a couple of exciting shows in the last week of February.   On the 27th we’re opening for BRKN LOVE and Royal Tusk in Toronto, ON, and on the 29th we’re opening for Theory of a Deadman in Barrie, ON.  Outside of that, we’re in the process of booking a month-long tour across western Canada this spring, to support our upcoming single “Take It All In Stride.”  The single was produced by five-time Juno Award winner Michael Hanson, who was actually the original drummer of “Glass Tiger.”

Our live performance is our own rendition of a rock and roll concert that has you engaged,  pumped up and wanting more (in a good way); powerful soaring vocals, guitars that rip through you, killer drum and bass work, and some nice harmonies as icing on the cake.

I’ll suggest two.. one for sure would be “Burn.”  It’s brought us a lot of attention and success so far.  It’s a riffin’ rock tune that gets the hips moving, and was permanently placed 97.7 HTZ FM’s rotation throughout the summer and fall of 2019 after we won their Rocksearch competition.  The second tune is our latest release, “Summer Nights and City Lights.”  This song definitely brings the heaviness we’re known for but also has many other elements to it that really start to foreshadow the sounds and ideas you’ll start hearing in our newer releases.

Definitely lots to consider here.  Big Wreck, Crown Lands, The Crooked, Revive the Rose, Cleopatrick, Ready The Prince, The Jailbirds, and The Wild are definitely up there for us right now!