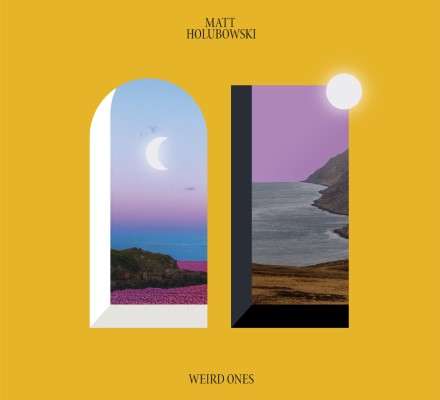 French Canadian singer-songwriter Matt Holubowski has released his third full-length album Weird Ones—the long-awaited follow up to his 2016 Gold record Solitudes. Weird Ones is a captivating expansion of Holubowski’s sound and songwriting with revisitings of his folk roots throughout it.

The record opens with the title track “Weird Ones” which picks up where Solitudes left off. The song focuses on Holubowski’s voice and acoustic guitar, then slowly introduces the new sounds and production elements that will later come to shape the record. The title track makes way for “Two Paper Moons” where Holubowski’s new direction completely unfolds. The bass and drums are at the forefront of the track and short synth lines are panned far left and right, popping out unexpectedly. With the new electronic elements introduced, the album feels like it free-floating in a way that is much different from Holubowski’s past work.

The bass and drums on this album are different from Solitudes in the sense that they are less about solely supporting the song’s foundation and have become independent elements with moments where they shine. There are powerful parts of the album where all the instruments are built up and then suddenly hushed by the soft fingerpicking of an acoustic.

Holubowski’s vocals are astonishing and are delivered in a way that allows the songs to breathe. On the more atmospheric tracks, he only sings when it is needed, and it is all the more powerful when he finally does. This album has some of Holubowski’s best songwriting to date. It has catchy folk choruses on songs like “Greener” as well as more soulful, lingering vocals on songs like “The Highlands”. Holubowski writes his melodies in a way that his notes are unpredictable but still accessible and inviting to sing along to. An example of this is the opening melody in “Weird Ones” which becomes an emblem for the record when it reappears in “Weird Ones II”.

Some more memorable moments on Weird Ones include the ending of “Around Here” where the heroic vocals die down and all you can hear by the end is a bird calling. The final chorus of “Down the Rabbit Hole” is another profound moment with the string section soaring above the track and the brief guitar line coming in as quickly as it leaves. The album’s second last track “Mellifluousflowers” returns to the stripped-down sound of Solitudes and is the perfect forerunner for the nearly ten-minute finale “Love, The Impossible Ghost”

Weird Ones is an ethereal experience that marks new territory for Holubowski without leaving behind the spirit of Solitudes or Ogen, Old Man. It is a landscape of a record that rewards you for exploring it.

Holubowski will be touring North America from February 27th to June 13th.